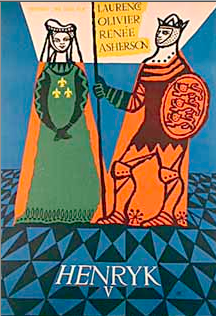 As Publishing Perspectives continues its examination of the works of William Shakespeare at The Play’s The Thing, we are moving on to the last in his brilliant sequence of history plays, as well as one of his most popular works, Henry V. It is a play known for its rousing rhetoric, patriotism, and lines such as “We few, we happy few, we band of brothers,” and “Once more into the breach, dear friends, once more,” that have become part of our common legacy. But is there more to the play than that?

As Harold Bloom points out, “This brilliant and subtle work will always be popular, I could say, ‘for all the wrong reasons,’ except that all reasons for Shakespeare’s eternal popularity are correct, one way or another.” Is the play, one made even more popular from the film versions made by Laurence Olivier and Kenneth Branagh, a patriotic love-letter to England or an ironic look at the savage realities of war? Was John Fitzgerald Kennedy, as Bloom suggests, “our” Henry V, a young leader who, instead of conquering France,  gave us the Bay of Pigs and Vietnam?

Join us in our reading, as we go beneath the nationalistic surface of the play to examine the complex meanings underneath, look at how different productions of the play reflect their era’s values and concerns, and unearth a Henry V that you didn’t read about in school.

It should be a lot of fun.