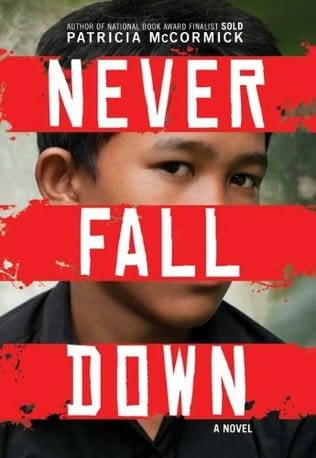 “It was almost a perfect amalgam of Arn’s actual voice, his own accidental poetry, and me ‘channeling’ that voice.”

Anyone who confuses young adult literature with simple kids’ stuff has not read Patricia McCormick. A former journalist with an investigator’s eye and an astute sense of social justice, McCormick’s novels for younger readers have taken her into a residential treatment center (Cut), the harrowing world of sexual slavery in India (Sold), the Iraq War (Purple Heart), and the killing fields of Cambodia (Never Fall Down).  McCormick wants us to know; she wants us to see.  She wants to teach us something about this world, but she is no sermonizer.  She’s a poet, in fact, this Patricia McCormick, writing of split worlds with lacerating precision, daring prose, and devastating beauty.

McCormick’s most recent book, the National Book Award finalist Never Fall Down (Balzer + Bray/HarperCollins), is a collaboration — a novel inspired by the real life of Arn Chorn-Pond. Swept into the Khmer Rouge’s brutal reeducation program, separated from his family in a series of labor camps, and bullied into being someone he might have never imagined could exist, Arn nonetheless survives, thanks in part to his talent for music and his refusal to lay down and die. Arn does not emerge from the book as an innocent. His shame is palpable, his losses many. As his interviewer, friend, and fellow traveler, McCormick’s greatest gift to Arn is the gift she has always brought her readers—her faith in the truth.

We were privileged to ask Patricia McCormick some questions:

Publishing Perspectives: You can be counted on to avoid easy topics, and, I suspect, you have always avoided easy topics. What were your favorite stories to cover as a journalist?

Patricia McCormick: It may not come as a surprise that my favorite newspaper stories were investigative ones: A profile of a drunk driver being tried for vehicular manslaughter alongside a profile of the mother of the girl who was killed in the accident. A profile of a teenage rape victim. A look at how trauma rewires the physical circuitry in the brains of young children. My favorite work as a magazine writer was a piece I did about returning to Vietnam with my husband to find the battlefield where he was wounded. But … when I wrote for Parents’ magazine, when my kids were little, I wrote about imaginary playmates, sharing and preschool crushes.

PP: Where did you first learn of Arn Chorn-Pond?

McCormick: A neighbor introduced me to Arn and I was instantly intrigued by his story – and by the difficulty he had telling it. When I interviewed him, he almost became that traumatized 11-year-old all over again. He had remarkable recall, but told the story in a very disjointed, emotional way. Normally, I wouldn’t presume to think I could tell someone’s story better than he could, but I could see how much it would help Arn to get distance on his early life by allowing me to ‘capture’ it between the covers of a book.

PP: One always knows that one is reading a Patricia McCormick book, and yet your novels never sound the same, never take the same form. In writing Never Fall Down, you chose to tender Arn’s voice in a distinctive English-as-a-second-language first-person voice. The images startle. The untraditional syntax hits us hard. “The Khmer Rouge, they make people disappear all the time. My sister, she disappear little by little every day,” Arn says, for example. Are phrases in this book taken directly from your transcripts?  Or was it the sound of Arn’s voice, and not necessarily his words, that inspired your poetry?

McCormick: It was almost a perfect amalgam of Arn’s actual voice, his own accidental poetry, and me “channeling” that voice. Some of it was verbatim, as when Arn, commenting on his adoptive mom’s anger that he had been hoarding food in his room, says she “went bazooka.” (So much better than the “correct” version: “she went ballistic.”) But in other sections, I would make use of the fresh, unconventional patterns of his speech, and riff on that. So for instance, when he first encounters a land mine, Arn hardly knows what to make of it. He didn’t say “Now even the earth is our enemy,” but he could have. I had listened to him speak so much that I felt could practically become him.

PP: Researching Never Fall Down entailed interviews with Arn himself and with those who knew him, a trip to Cambodia with Arn at your side, and a lot of journalistic fact checking.  In the end, Arn learned a lot about himself and has spoken of his gratitude. Still, in the novel, you never tried to make his story pretty; you make it clear that his soul was embattled. Was it difficult to venture into the darkest parts of Arn’s past, even as your friendship with him as a real person deepened?

McCormick: It was a privilege to be trusted with the darkest aspects of Arn’s story. It was also deeply painful to be in the presence of so much pain. I tried to always be myself; I cried when I was moved and I didn’t try to hide my shock or my anger at the way he was treated. But I hope I never conveyed judgment — because, honestly, all I felt was awe and love and respect.

Interestingly, Arn never shied away from telling me the worst of it — the things he did to survive. What he didn’t reveal were the acts of kindness or bravery or generosity that allowed others to survive. It was only when I interviewed other survivors that I heard about those things.

PP: This isn’t the first time you’ve traveled far and required the assistance of translators. What fuels your urgency? What frustrates you about the challenge of these international political/historical stories? What about these far away places has proven most difficult to render? What, ultimately, can never be rendered about locales that we, as authors, can only ever visit?

McCormick: The urgency comes from a fire I have to get the word out — to bring back stories that might otherwise not be heard. But I try to approach the stories with an equal measure of humility — with the awareness that I might not get it right because I wasn’t fully able to penetrate a culture that is foreign to me.

But isn’t that what all fiction is? An attempt to travel in the foreign lands of someone else’s experience, to imagine a life that is not yours? It’s audacious, when you think about it. And so it’s important for me to always check that urgency with skepticism of my own abilities to bring out that story and to check and double-check myself all the time.

PP: I have been told about libraries that float about in boats in Cambodia. Did you encounter them there? Did you get a sense for the kinds of novels being written and read today in Cambodia?

McCormick: I never saw those floating libraries but I understand that they exist. In some parts of the country, that is the only way books — or many things from the outside world — can enter. I don’t know what is being written in Cambodia today: I do know that nearly half the population is under 25 and rabidly curious about the outside world. They are streaming into the cities for education—and reading everything they can on their cell phones!

PP: Has Never Fall Down been translated? Are there plans to release the book in Cambodia itself? Are memories and novels about the Khmer Rouge popular or suppressed in Cambodia?

McCormick: We have been very fortunate: the US embassy has given us a grant to translate the book into Khmer. It will be the first survivor narrative to be distributed in schools, if we are lucky. Why are there so few stories published? There is still a real reluctance to talk about the past. Survivors live alongside former Khmer Rouge. To unearth those stories — for innocent people to talk about what they did to survive, for former Khmer Rouge to talk about why they believed they were doing the right thing to purge the country of outside influences — might destabilize a fragile harmony.

PP: What is the biggest misunderstanding about young adult literature, and what do you hope your books can and will do to counter the mythology?

McCormick: The biggest misunderstanding: that the books are poorly written. That view is so condescending not to writers but to the readers! It reflects a general tendency to dismiss the abilities of young people. Young readers are the most demanding of audiences — if you don’t grasp and hold their attention, if you don’t write your very best work — they have too many distractions to stay with you.

PP: What is next for Patricia McCormick?

McCormick: I am working on a book, tentatively called “A Nice Girl Like You” about a girl who becomes addicted to prescription drugs because I believe these are the drugs that will take anyone down.

Beth Kephart is the author of fourteen acclaimed books, most recently Small Damages, set in southern Spain.  She blogs daily about books and the book life at www.beth-kephart.blogspot.com.

DISCUSS: Want to Learn “What’s Next” for YA Literature?