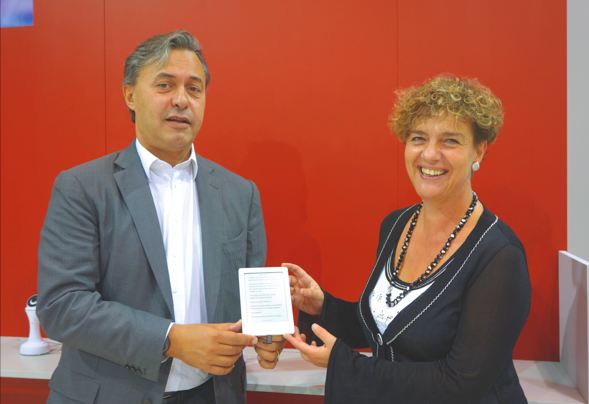 “It is the first time that a publisher has partnered directly with an e-book retailer.”

A little more than one week ago, the Kobo Touch e-reader went on sale at 350 of the 600 Mondadori bookstores across Italy. “And so far, the reception has been great — or at least there are no complaints,” smiles Riccardo Cavallero, General Manager of Mondadori’s trade books division. The new e-reader has competition in the Italian market, where Amazon is already firmly established with its Kindle, and Telecom Italia offers the Biblet e-reader through its Bubo Libri bookstore, among others. Like its competitors, Mondadori’s Kobo reader offers some 60,000 titles in Italian (of which 30,000 are public domain or otherwise free titles).

But Cavallero points out that what makes this device unique is not what you can buy on it, which is the same as the others, but who is behind it: “As far as I know, it is the first time that a publisher has partnered directly with an e-book retailer, so we are developing a new model. As a publisher, we can now have a very direct engagement with our reader, which is exactly what a publisher needs.”

Asked why the company didn’t put its brand on a white label device rather than partner with an existing brand, Alessandro Del Sarto, Mondadori’s Head of Innovation and Program said simply, “we weren’t looking to reinvent the wheel,” adding “Kobo is an international platform, it is open, and it is growing fast, so it was a good fit for us. It allows us to focus on our core strengths and to develop products, scout books and produce great content.”

But, adds Cavallero, “The next challenge for us as a publisher and a retailer is to be able to develop new ideas and concepts for these new platforms.”

As for the digital future, Cavallero believes that the biggest change on the horizon is the development of new pricing models. “In Italy, we have agency pricing, but to me, the only difference between agency and the reseller model is the discount. But if we have the control, we can set the parameters. In Italy, I look at how the pay TV model has been implemented. It’s very popular. That’s something I really think would work well for books.”