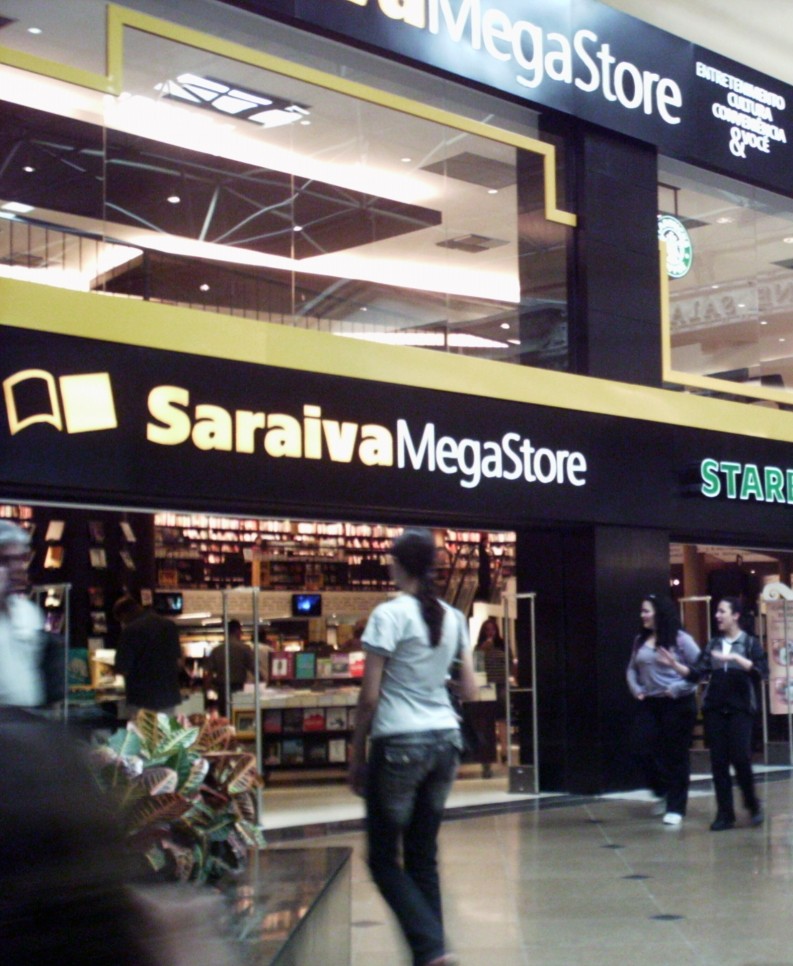 Saraiva: Could it be Amazon's soon?

Bookstores are rarely responsible for causing a stir at Bovespa, São Paulo’s stock market. Just one bookstore chain, Saraiva SA Livreiros Editores (SLED4) — Brazil’s largest — is listed with the exchange. So what happened this past Wednesday on Bovespa’s trading floor, mere minutes before the market closed, was really quite extraordinary and, perhaps, symbolic of the new waters that the publishing industry has been navigating lately: when Bloomberg reported that Amazon was in talks to buy Saraiva, Saraiva’s shares shot up to R$28, the highest price the company has seen in the past 12 months, an increase of 7.28% on the day — of which 7% happened in the final minute of trading.

Rumors of Amazon’s activity in Brazil have been circulating for years, with more and more coming each day. The fact is, you can’t really call them rumors any longer. Whether it is going to happen with or without Saraiva remains to be seen, but Bloomberg’s anonymous source seems to be spot on. Just last week, trusted Brazilian journalist Lauro Jardim published at Radar On-Line that Amazon has set the launch a date for November. Everyone knows, however, that Amazon rarely uses the future tense in its public statements, so one cannot take this information as anything more than speculation, albeit very plausible speculation.

Why? Two reasons. First, negotiations with DLD (Distribuidora de Livros Digitais) are close to being finalized. DLD is a consortium of seven big Brazilian publishers that controls around 35% of the bestsellers in the country. They always negotiate as a block and are doing so with Amazon. And they are, by far, the largest challenge for the Seattle executives, since they are aggressively demanding favorable commercial conditions and want to maintain control over prices. Limiting Amazon’s aggressive discounting is a sine qua non condition for these magnificent seven. But sources in the market have made clear that a deal with DLD is very close and it will happen before the end of the year. Also, according to local news, Amazon already has a deal with Xeriph, the main Brazilian e-book aggregator, to distribute at least some parts of its digital catalogue. So it is a fact that Amazon either already has or is about to have enough content to open their Brazilian e-book store. A November launch doesn’t look like such a long shot.

If Amazon does launch, can it make Kindle devices available in Brazil in such a short time? Well, it depends on what “available in Brazil” means. If it means having Kindles stocked locally or sold in local brick-and-mortar retailers, the answer is probably “no.” Unless the devices have already arrived in Brazil or have at least been shipped, it is hard to imagine the whole importation process happening in just a few weeks, including customs clearance. However, if “available in Brazil” means that Brazilians can order Kindles online direct from the US and have them shipped to their homes, this is already operational.

At around US$216 (the price of the cheapest previous generation e-ink Kindle) delivered to a Brazilian address, taxes-included, Amazon has the cheapest dedicated e-reader in Brazil. Now imagine if Amazon gives a special discount or offers free express delivery for Brazilian customers. In that case, no wholesale imports would be necessary. That is the second reason it is quite plausible to speculate that Amazon will open in Brazil before the end of the year. As for Amazon’s competitive price on Kindles, one should not forget that Kobo and Livraria Cultura have promised to have their e-readers available before December, so one can reasonably expect something of a price war as the foes duke it out for holiday customers.

Let’s not forget the other scenario: the rumored acquisition of Saraiva. If this is correct, things might happen differently, if not faster. In order to better understand this possibility, however, one must learn a little more about the largest Brazilian bestseller.

Saraiva was founded in 1914 by a Portuguese immigrant as a second-hand bookstore specialized in law books. Three years later, it started publishing books as well. Today, almost 100 years and several acquisitions later, the Saraiva group includes the largest Brazilian bookstore chain and one of the most important Brazilian publishers, one that is particularly strong in K-12 — where it benefits from massive government-funded purchases — and academic law publishing. Other imprints include trade fiction and non-fiction, children’s, business and other educational fields. On the bookselling side, Saraiva owns 102 stores, of which 47 are megastores. In 2008, the group acquired Siciliano, the second largest Brazilian bookstore chain, and consolidated itself as the largest bookseller in Brazil (to compare, think of Barnes & Noble acquiring Borders, had it still existed).

The total Brazilian book market valued at US$ 3.3 billion, according to the latest Global Ranking of the Publishing Industries. To give a sense of Saraiva’s power, the company had revenue totaling US$930 million,* in 2011 — though more than a third of it was earned from non-book items. And this number keeps going up: the company had 20.7% growth in 2011 over 2010, with earnings (Ebitda) of US$85 million or 9.1% of the revenues. In the first half of 2012, revenue was US$438 million, a growth of 8.9% over the same period in 2011. Earnings also grew from US$32.3 million to US$39 million in the first half of 2012, on a 8.9% margin. Saraiva bookstores, however, don’t just sell books, but also music CDs, movie DVDs, computers, electronics and office supplies. Their website, launched in 1998, sells an even broader selection of items, from bicycles to refrigerators. In 2011, US$399 million of sales came from non-book products, corresponding to 56.2% of the chain’s revenues.

The figures are even more interesting when one compares the performance of Saraiva’s bookstore chain to that of Saraiva’s publishing house. Back in 2011, just 23.7% of the group’s revenue came from the publishing house, i.e. US$ 220 million. In the same year, however, the earnings (Ebitda) of the publishing business corresponded to 55% of the whole group’s earnings, around US$47 million. That was possible because Saraiva bookstores’ earning margins were only 5.4% last year, while Saraiva publishing house’s reached 19.3%. It is also important to keep in mind that 35.9%, or US$255 million, of the bookselling business’ revenues came from the online channel.

The analysis of these figures is crucial to understanding the possible paths an acquisition of Saraiva by Amazon might take. There are basically three options:

This is clearly the least attractive option, since Saraiva would likely not want to let go of its publishing unit, which is the most lucrative part of the business. Amazon, on the other hand, would probably think twice before becoming a competitor of other publishing houses in Brazil before even opening their own local store. It would not make strategic sense to get into publishing before actually getting into bookselling in a new market.

This could be a dream-come-true scenario for Saraiva, since they would sell their less profitable asset and keep the most lucrative one. Saraiva’s bookselling and publishing divisions are already separated into two different legal entities, making it relatively straightforward to sell just one of them. Of course, in this case, some synergy would be lost, but nothing that a good contract of future obligations could not overcome. And the profit margins are so different between the two business that such synergies would not be a deal breaker. On the Amazon side, however, it doesn’t seem to make much sense to acquire 102 bookstores. That would be the first time the Seattle giant would actually run brick-and-mortar stores. It is hard to imagine that Amazon would change its global strategy just to enter the Brazilian market. Yes, Brazil is the country of the moment, but the world is a big place and one can easily imagine Amazon going to other markets such as Scandinavia, eastern Europe, Russia or South Africa before rethinking their raison d’être or selling their soul to the brick-and-mortar devil.

Saraiva’s website is responsible for 27.4% of Saraiva’s revenue. If Amazon could acquire just the online business, it would allow them to quickly find their way into the market and overcome several obstacles without having to commit to running physical stores. However, this would make no sense for Saraiva. What is a bookstore chain without a website in today’s world? It is difficult to imagine Saraiva making the same mistake Borders did by letting its web presence in Brazil all but vanish by selling, partnering or starting a joint venture with an online company such as Amazon.

Should a negotiation between the two groups really exist, it makes sense to believe it is around option #2 or #3. The decision clearly favors either Amazon or Saraiva, depending on which direction it goes and largely hinges around the inclusion of the 102 bricks-and-mortar stores.

Whatever happens, however, there seems to be no reason for Brazilian publishers to celebrate. Should Amazon acquire Saraiva, Submarino is sunk, likely to be driven out of the book market — if not out of business altogether in the medium term — as it would only serve to strengthen Saraiva’s already powerful position in the market. The end result is, ironically, likely to be less competition, more consolidation and a tougher market all around for publishers.

Eventually, Amazon will make an announcement. And it will be in the past tense. Until then, all we can do is to wait for the next episode in the “Amazon is coming to Brazil” soap opera, while Brazilian day traders pocket a bit of funny money from all the brouhaha.

Carlo Carrenho is the founder of PublishNews and a publishing consultant in Brazil.

PORTUGUESE: Click here to read this article in Portuguese.