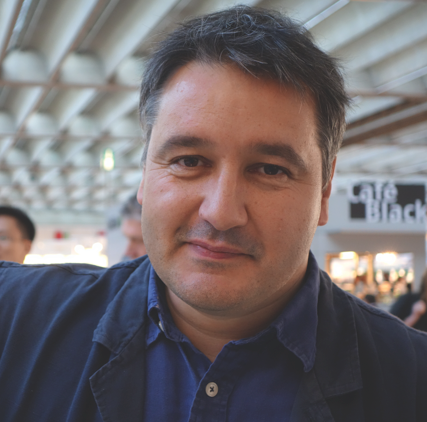 Frankfurt virgin. I come to this off the back of our festivals in Segovia and Xalapa that wheeled and dealed in freedoms of speech, salsa rhythms and flying suckling piglets. We do energy and exchange and celebration. And here I’m wandering around awed by the thrum of serious and utterly focused industry.

The thing I never dreamed about Frankfurt was how calm and quiet and deeply civilized it is. It’s partly, of course, that the whole shebang is designed and organised on a scale that respects space and fosters communication. And it’s partly that publishers are without exception really interesting and engaging and passionate about whatever they’re selling. I know and hear everywhere that the deals on the book futures markets are done here with the same vigour and brutality as the maddest bank trading floor, but there’s something of the library here that sweetens the whole experience. Even the parties and dinners and nights of romantic negotiations seem to be conducted with a grace and pleasure that sings We Love This Business.

Halls 5 and 8 seem to be my version of that cafe in Paris where you’re supposed to bump into everyone you’ve ever known. And everyone seems cheerful and inspired by something they’ve just learned. More often than not it feels as if publishing has begun to get a handle on its own value. I keep hearing people saying they’ve made a digital breakthrough that isn’t just about bowing to the great superpowers of retail. It sounds to me as if the moment when the people who play with lucrative multi-media begin to talk not about ‘content’ but about ideas and stories is really coming. And that it’s the publishers of taste and style who will begin to dominate other media.

So, in a world facing the same austerity as the motor industry, and the shock of a one-generation technological evolution, there’s a quiet assertion of resilience and optimism that’s rooted, it seems to me, in the one thing that publishing can deliver better than any other medium or sector: authority.