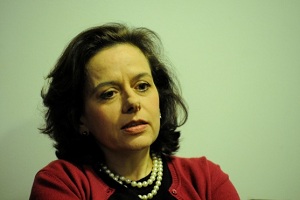 French economist Françoise Benhamou answered international survey conducted by the Forum d’Avignon about the changing world of culture and its impact on the economy in Europe. She will be speaking on the first day of this year’s Forum — the self-described “Davos of Culture” — which place November 15-17 with the theme “Culture: Reasons to Hope.” Forum d’Avignon: Does culture / creative imagination give you a reason to hope?

Françoise Benhamou: Creativity is not only hidden in the works, it also a product of the

This creativity even allow the emergence of events, as interesting and disconcerting as something like Wim Delvoye’s exhibition “in the Louvre.”

The new “porosity” of the world, particularly enabled by the emergence of new communication technologies, has liberated the artists by allowing an economic and geographical reorganization: artists who were before forced to move to countries like the US to gain visibility can now get famous in their own countries without needing other nations.

Benhamou: In addition, creative imagination benefits from, in general, the increase of mobility: Artist traveling is a wonderful way to make different cultures meet, even if it remains a lot to do concerning the support given to these artists’ trips, in particular by means of programs close to the Erasmus model.

There are many reasons to hope — but it is necessary to give the creators and the others the means to make them a reality.

FDA: Who embodies it the best?

Benhamou: It can seem derisory, a lot too “materialistic,” but the example of a digital book that would go beyond the only digitized book would be a genuine reason to hope, allowing a simplified way to update data, more exchanges and much enrichment of the content, almost in real-time.

The digital diversity of creative forms it leads to also enable the artists today to express themselves in “complementary” forms. The example of the comic books is fascinating, associating different types of creation that complement each other, through new forms of communication, of diffusion. Networks are being created in these fields — networks of sharing, of work, of finance hunting, etc. — it reminds that creativity spreads in adaptation, putting artists in touch and opening up their new horizons for their respective circles. In comic books, I think about Delitoon, the 8Comic collective, and more. More generally, it can go from restricted artists/amateurs circles to larger circles, from Socialarts to many groups in the regions — Pays de la Loire, Bretagne, etc. In a general way, the internet, as a tool, gives reasons to hope because it is a formidable vehicle of distribution, with a reservation about the question of the data protection, a vigilance point we must keep on watch.

FDA: What would be the personal initiative/project/work that embodies it the best?

Benhamou: The academic world, and the education sector in general, are undergoing permanent changes, where the margin of increase remains real. The reasons to hope mingle with the reasons to teach, to give, to pass on codes, keys, in order to help underprivileged young people, to fight against social violence, and those are, to me, reasons to hope I think about every day. Projects that are worth it must be able to find their place at school and at university, and the artist must be able to take over those places, work and share with young people.

FDA: How would you like to pass it on to future generations?

Benhamou: Concerning the support of creativity and its enhancer, when it exists, remains to invent. The university, as a place of emergence and support of creation, deserves to be reinvented. There remains a lot to day in term of education too: it is the recurrence in cultural places that creates a quality relationship between a person and the cultural object.

A urban policy, promoting the distribution of culture where people live, would enable creativity to pass on and to go towards real changes. We must build these reasons to hope. In order to do that, art and culture must go towards the suburbs, the provinces, reinvest the whole territory and not be limited to centers. We must force art to cross the cities, and influence them. The project of a Villa Medicis in Montfermeil was a good initiative if we turn our attention to this type of criteria. The introduction of artists residences in the universities also is a step in the right direction and is something to go in depth into: Paris 13 made this kind of experiment and welcomed a residence of circus artists.

This aspect is a lot more developed in the US or in the UK because the campus works as a microcosm and the time dedicated to cultural activities is a lot more supported. Up to date, there remains a lot to do to professionalize talent and to make a job out of creativity, or at least an asset. In the US, extracurricular activities, from sports to arts, have a weight they do not have in Europe: such a development creates opportunities for creative people and promotes imagination in universities.

Finally, companies also have a role to play in the cultural passing on; they do by means of the work councils (access to shows for example) or of foundations…For the small businesses, the mutualization of this kind of initiative could turn out to be very positive.