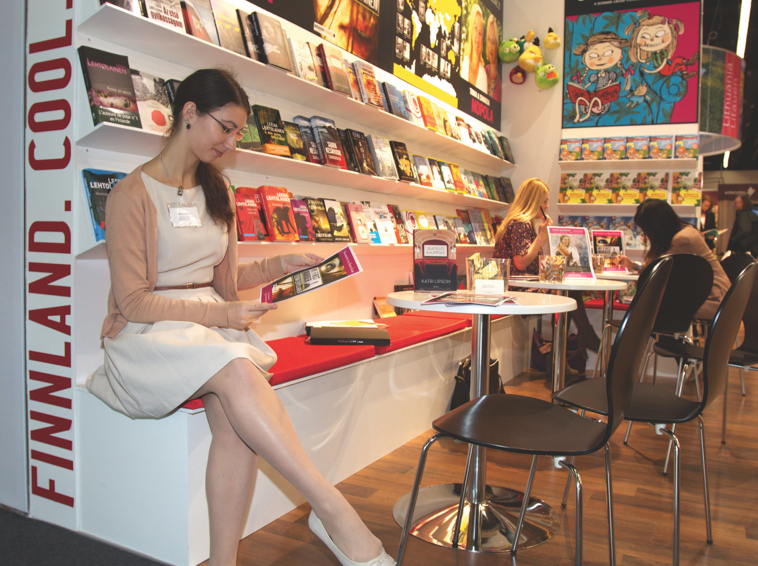 The Finns’ love of books has bolstered the publishing industry in spite of global economic challenges.

This article was supported by FILI – Finnish Literature Exchange.

In Finland, the publishing industry isn’t exactly on fire, but in spite of the challenges of the last few years, cool heads have prevailed. A tiny gain in sales over the previous two years, following a big dip after the global financial crisis of 2009, has created a “slow and steady wins the race” mentality. It also helps that this well-educated nation of 5.5 million residents really likes to read.

“Books still have a strong position in Finnish society, and 77% of the population buys at least one book a year,” says Sakari Laiho, Director of the Finnish Publishers’ Association. Seventy-five percent of parents read aloud to their children, a practice proven to establish good reading habits early on. What’s more, writing is ranked among the most respected professions.

“Belief in the power of reading to foster well-being and that access to culture is a right for all are the cornerstones of the Finnish mindset,” says Dr. Iris Schwanck, Director of FILI, the Finnish Literature Exchange, a cultural program to support the publication and promotion of literature abroad. “Reading is one of our superpowers and an integral part of the Finnish story.”

Leena Majander, Vice President of WSOY, the second largest publisher in Finland (purchased last year by Sweden’s Bonnier), is intrinsically aware of the importance of literature to the nation. “The Finnish language and books published in our language are vital for the identity of our small nation. A common saying is that Finland has been built with wood (i.e. the paper industry) and head (i.e. the brains nurtured by our famous education system). Now we only have the head, as the market for the wood is rapidly declining. The head needs food, which books and literature can give to people.”

And the country is very committed to supporting its home-grown writers; the Finnish aesthetic is so closely entwined with their national identity that locals often look to their own backyards for reading material.

“It is said that Finland has strong literary traditions, and writers have played a strong role in our history,” adds Laiho. “Readers are especially very keen on reading domestic authors. In the long run, this investment pays off many times, but as we know, publishing is not for those who wait for instant results. One guarantee for the success of our domestic literature are the Finlandia prizes, which are awarded in December, making it very easy for people to pick a domestic book as a Christmas present.”

Unsurprisingly, considering the country’s sterling reputation as educators, non-fiction is the largest category in Finland, with textbooks following in second place. In 2011, sales were evenly split between domestic titles and translations—an amazing feat considering how tiny the country is.

Abroad, the Finnish literary sensibility is also quite appealing. “In general literature, I would say that our reputation is of being a somewhat exotic country with quiet people living near to nature,” says Laiho, and its something which gives Finnish writers status on in global marketplace.

“Our foreign rights operations are stronger than ever, and everybody in the publishing team has an international mindset. We all work hard for the international success of our authors with strong sales potential abroad,” says WSOY’s Majander.

So, as Finland celebrates its literary locality with pride and the marketing finesse of timing — new award-winning titles are presented during the holidays, serving as collective stocking stuffers for a nation of readers — the publishing industry looks to export its success abroad.

There is an untranslatable Finnish word — sisu — which is closely tied to the Finnish character. It roughly means “perseverance in the face of adversity” and it applies here. With Finland as an example, the global publishing industry can take heart that whatever challenges publishers face, slow and steady gives you the opportunity to survive, and hopefully, to thrive.

Finland will be the Guest of Honor at the Frankfurt Book Fair 2014 with the slogan “Finnland Cool.”