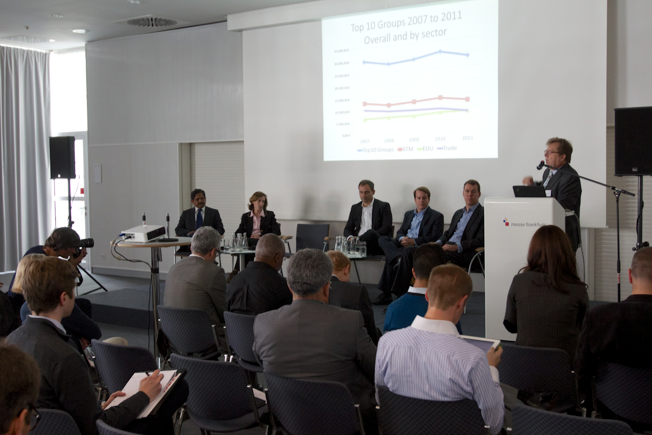 Which e-book trends cut across cultures and countries, and which are country-specific? Execs from Barnes & Noble, Kobo, Google, France’s FNAC and India’s Indiaplaza discussed similarities and differences at the CEO panel on October 10, 2012 at the Frankfurt Book Fair. “Customers are going to pay for value. In the long term, we’re going to see e-books worth something,” Michael Serbinis, CEO of Kobo, said. “We see a very healthy business.” As for changes in pricing models, “we just see them as fluctuations in this long-term evolution.”

Jamie Iannone, President of Digital Products at Barnes & Noble, agreed that “for quality works, customers are really willing to pay for e-books. We [and publishers] have been sensitive to the value of the book. Even people that buy e-books still read a lot of physical books,” he said, which is “very different from other industries.”

Santiago de la Mora, Director of Print Content Partnerships for Google in Europe, the Middle East and Africa, said e-books are just at the beginning of adding “tremendous additional value relative to the print book.” He mentioned functions like translations, locations, definitions and highlights (all of which are available in Google’s recently updated Play app for Android). “The e-book is a boon to the industry because in some cases it’s an enhanced product [over] print.”

Venkat Valliappan, Head of Books at Indian e-commerce site Indiaplaza.com, said e-book prices must remain low in India. “[International] publishers sell print books in India at [lower] prices and the same should be true for e-books,” he said. The volume of Indian customers that international publishers will gain by keeping their e-book prices low “has to be given the utmost importance. That’s why the major publishers have accepted [lower prices] in the past couple of years,” he said.

Similarly, booksellers noted differences in the types of devices that consumers are looking for.

“Our customers, when they’re frequent readers, just want e-readers. That’s very clear,” said Elodie Perthuisot, director of books at French bookstore chain FNAC. And she said they “don’t hesitate to spend thirty more euros to get the very new device. It’s not a matter of price, it’s a matter of content.”

De la Mora cautioned that publishers and booksellers shouldn’t forget about smartphones: “There are more than one billion smartphones in the world.” As for device choices, “the consumer will decide, but it has to be made easy for them to access the content.”