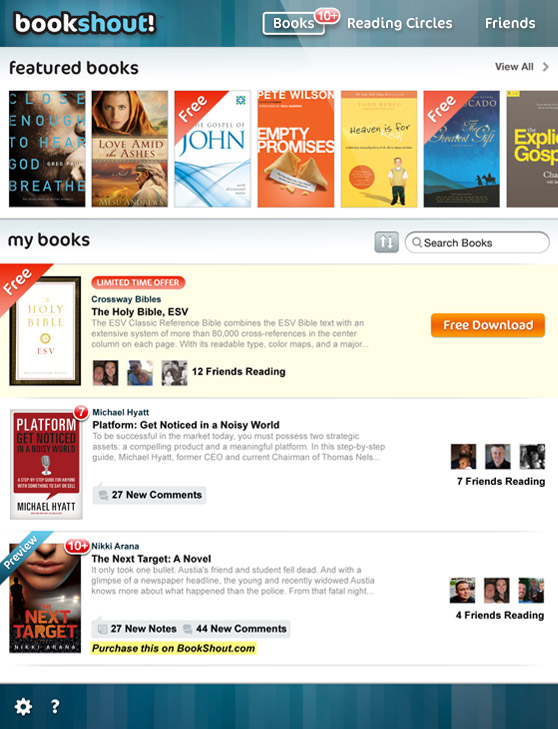 Dallas-based startup BookShout, which is backed by book distribution company Ingram Content Group’s CEO John R. Ingram, is doing something that may make Amazon and Barnes & Noble mad: it is importing books that customers have purchased on Nook and Kindle into its own Android, iOS and web apps. BookShout is doing this with the support of large publishers. The startup has already signed deals with Random House, HarperCollins, Macmillan and Wiley, and is “finalizing” agreements with Simon & Schuster, Penguin and Hachette, along with other publishers. Ingram’s publisher clients can sign up directly or through Ingram.

BookShout founder and CEO Jason Illian explained to me — sort of — how the process works. The company’s app doesn’t break the DRM on Nook or Kindle books. Rather, Ilian compared BookShout’s model to personal finance site Mint, which imports transactions from users’ bank accounts. Neither Mint nor BookShout relies on APIs (Amazon and Barnes & Noble don’t make their APIs public). Rather, to import books to BookShout users log in to the app with their Amazon or Barnes & Noble user name and password. The app verifies their purchases and then — if a consumer has bought a Kindle or Nook book from one of the publishers that BookShout is working with — lets the user access the publisher’s version of the file through the app. These publisher files are protected by DRM.

“The great thing is, it’s just your book,” Illian told me, adding, “It’s not taking Amazon or Barnes & Noble’s sale. If you want to buy from them, great, keep buying from them.”

The advantage for readers, the company says, is the ability to integrate their e-books with BookShout’s social reading capabilities—a goal that many startups have focused on, though it’s unclear that many readers actually desire these features.

The advantage for participating publishers, Illian says, is more data about their readers: “We want to be able to give information back to the publishers on how people are reading, where they’re shopping, what they’re sharing.” The Kindle and Nook book importing, though, doesn’t actually provide publishers with much information about their readers other than which platform they’ve bought a book on. Rather, BookShout’s hope is that publishers will choose to run promotions and let their authors interact with readers through the BookShout platform.

BookShout is also selling e-books directly — through its website, not its apps — and takes a cut of those sales. So far, most of the titles on BookShout’s website are Christian and religious titles from Thomas Nelson, which is now owned by Barnes & Noble.

It seems like only a matter of time before Amazon and Barnes & Noble shut down BookShout’s import function. “I think they’ll find us,” Illian told me with a big smile. “I’ll be interested to see what Amazon thinks. My argument to them is: one, we’re not taking your sales, and, two, we’re not breaking any terms of service because we’re not taking any files from you. Will they try to shut it down? Maybe. Amazon is notorious for protecting their ecosystem. We’ll see how they react.”