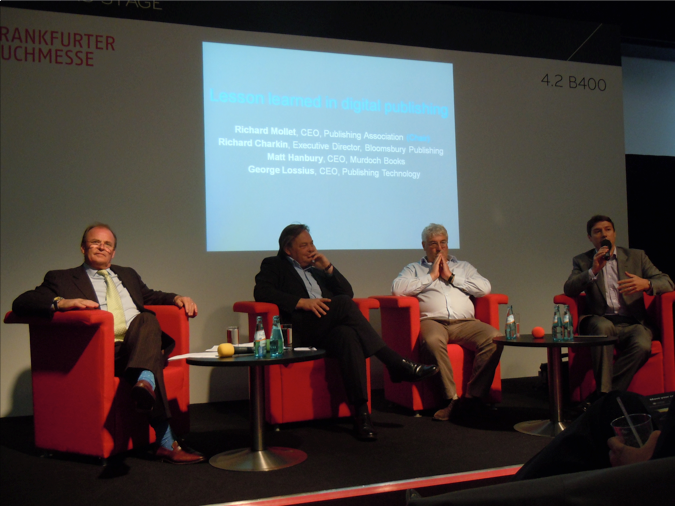 What lessons can trade publishing learn from the music and film industries? Richard Mollet, chief executive of the UK Publishers Association, suggests it can learn far more from the successes of scientific and academic publishing. It’s a particularly interesting statement coming from Mollet, former Director of Public Affairs at the BPI (the representative organisation for the recorded music industry in the UK).

It’s also an opinion that was warmly supported by the other participants on Wednesday’s “Lessons Learned from Digital Publishing” panel. Richard Charkin, executive director at Bloomsbury Publishing, cites the success of Crossref, a collaboration that allows cross-publisher citation linking in online academic journals—and the failure of trade publishers to cooperate similarly to create a publisher-led retail alternative to Amazon.

Charkin, whose preference for academic over trade publishing is well-known, points out that academic publishing is now a 90%-digital business, with trade (in English) “lagging” at 15–25%. And that one of the industry’s errors, says Charkin, is that it hasn’t applied the lessons of digital publishing to print. After all, a print book is handled 24 times before it’s sold, and publishers pay royalties “based on a retail price that no one pays,” as part of a system “whose complexity would make a rocket scientist blanch.”

Matt Hanbury, CEO of Australia’s Murdoch Books (which he sold just before the fair to Allen & Unwin), says that there is an imbalance between risk and pay-out, with publishers taking chances, then losing their earnings to big players in bad deals they never should have signed. The much-promised digital revolution in publishing “has been highjacked by technology providers.”

George Lossius, CEO of Publishing Technology, says publishers have clung to big players because they give direction, even if that direction doesn’t make sense. In recent years, publishers have rushed to make iPhone apps, although 60% of smartphones are Android phones.

The panel wasn’t completely pessimistic, despite an awareness of the industry’s many missteps; Lossius predicts a doubling in readership (if not in revenue) due to increased digital reading, device use and accessibility.