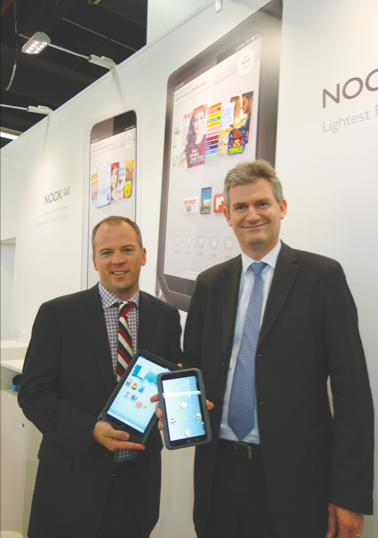 Here’s a typical Frankfurt story for you: I live in the United States, but had to come all the way to the Frankfurt Book Fair to have a meeting with Barnes & Noble, America’s dominant bookstore chain. B&N had a stand in Frankfurt for the first time and if you missed it, don’t be surprised, as it’s in Hall 6, sandwiched in a dozen square meters between the Chinese pavilion and the French publishers. The signage said simply: Nook and Nook Development.

Why no B&N branding? Because their team was there representing an entirely new company, Nook Media, armed with $300 million from Microsoft and another $305 million committed over the next several years.

“Microsoft?” you say, “I thought they were dead, doomed to second-tier status by Apple.” Yes, well, as we noted last week, users of Microsoft devices are the most active buyers of book content on mobile devices, so it would make sense that they would invest in the book business (after, it must be noted, killing off their own book digitization project several years ago).

“The point of the new company is not about being a retailer, it’s about content,” notes Patrick Rouvillois as Vice President, Managing Director — International, who is based in Luxembourg.

That Rouvillois is a Frenchman is symbolic, as it, in his own words, asserts B&N’s “commitment to developing the international market.” It’s also ironic in its way, as the French have proven anything but amenable to digitization. A headline in Livres Hebdo last week read “France Remains Impervious to the Digital Flurry in Frankfurt.” (Read more about digital publishing in France here.)

B&N’s arrival in Europe signals the start of Round Two of “America vs. the World.” The beachhead for B&N is the UK, where Nook devices will be available in 1,200 stores by Christmas. Round One saw the invasion of Google, Amazon and Apple and their “take no prisoners” approach.

But this time, B&N promises it’s going to be different. “We are huge supporters of the author and publisher community,” said Rouvillois.

Translation: we come in peace.