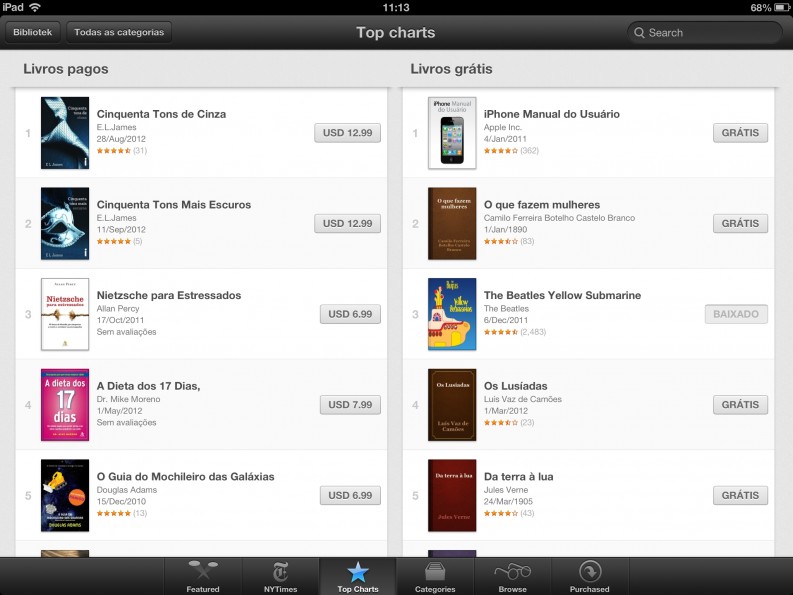 The iBookstore has opened for business in most of Central and South America, several sources are reporting. Books have also gone on sale in New Zealand. The news comes just a day before Apple is expected to launch a lower-cost, smaller-format iPad tomorrow.

In Latin America, the store is reported to be open in Argentina, Bolivia, Brazil, Chile, Colombia, Ecuador, Mexico, Paraguay, Peru and Venezuela, in addition to other countries in Latin America.

Of course, there is one very important caveat: everything is priced in US dollars, save for in Mexico, and the sales, at least in Brazil, are essentially available through a “window” to the US iBookstore, where currently Apple is offering just 3,000 titles in Portuguese — including titles from DLD, Intrinseca, Simplissimo, and the public domain. Some Portuguese titles from Portugal are also on sale, apparently for titles for which no Brazilian rights have been sold. (Oddly, no books in English are available, though there are titles in French and Spanish, and the titles from Portugal don’t indicate that they are written in a significantly different tongue.)

For Spanish-language buyers, there are 12,000 titles available in Spanish, most of which appear to be from Spain’s e-book distributor Libranda. In all there are 50, 000 fiction titles and just 3,800 non-fiction titles on sale to these new markets. (See screenshots below).

Earlier, we reported on the audacious machinations Apple has gone through to get things started in the rest of the Americas, including routing transactions through Guyana and the Falkland Islands.

Of course, the real news here is that Apple is finally making localized content available, for the first time.

We will update this story as the situation becomes more clear.