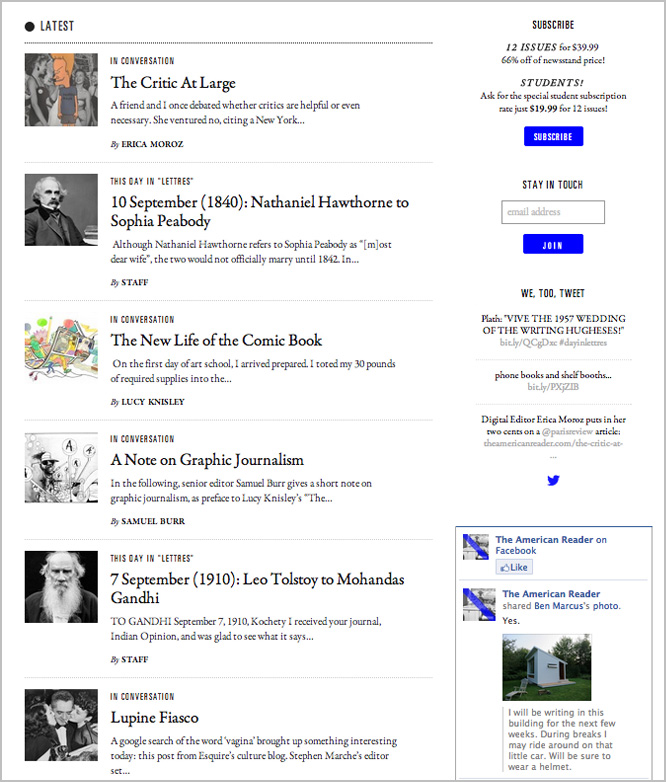 According to The Daily Beast, its conception was simple enough. Twenty-four year old Princeton graduate Uzoamaka Maduka and her boyfriend Jac Mullen decided to launch a literary magazine aimed at readers like themselves; a magazine that they themselves would want to read, a magazine geared towards Generation Y.

And so was conceived The American Reader, a monthly literary magazine with a target audience of readers between the ages of 22-35, a magazine that, according to Maduka, would “reinvigorate the literary conversation and reintegrate it into the larger cultural conversation.” Investors were found; a creative team, including fashion writer and author Stephanie LaCava as its editor at large, was assembled, and on Monday, September 3, The American Readerwent “live” online, with a print edition and expanded online form to come in October.

Each print issue will include new fiction and poetry; reviews of new fiction and poetry; essays; occasional interviews, and a portfolio of translated literature from a single country. (The first edition will include stories by Stephen Dixon, Jason Schwartz, and Olga Slavinkova and an essay by Mikhail Shishkin.) The website will offer several original posts a day; many of which will serve to continue the “conversation” begun by the magazine; the magazine will be sold at bookstores and by subscription.

As Maduka described it in her editor’s forward, The American Reader’s goal is an ambitious one:

“We’re led to believe that each of us, alone with our thoughts, are just that: alone — rather than one of many silenced readers and thinkers across this city and this country who have not been given a serious, dignified, and regular space where they might come together and speak directly, honestly, and fearlessly to one another.

The American Reader‘s immodest aim is to chronicle this conversation, in all its forms, on the printed page, and to host a daily online forum devoted to furthering it. This is a simple task, but far from an easy one — and it is a task made possible only by your engagement and your enthusiasm.”

We wish them the best of luck.