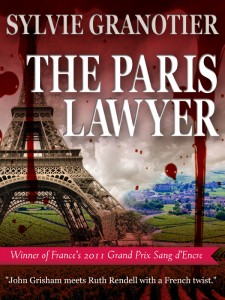 “What is translated tends to be very literary and is sometimes a little bit harder to access for a lot of readers.”

Thanks to Stieg Larsson, many Americans are clued in to Scandinavian crime fiction. Offerings from France are less familiar, with only a handful of contemporary authors having ever broken through to English readers in translation, Jean Claude Izzo, Sébastien Japrisot, Fred Vargas, among the few examples. A new publishing company, Le French Book, is hoping to change that. “There are 426 novels coming out in September in France,” notes Anne Trager, Le French Book’s founder. Few of them will be translated into English and made available in the United States. Trager’s mission is to bridge this disconnect. “We’re trying to really open up people’s understanding of what kind of things are being written in France,” Trager explains — particularly when it comes to genre fiction. To that end, her company will publish three French books in English this fall: The Paris Lawyer by Sylvie Granotier (originally published as La Rigole du diable from Albin Michel) The 7th Woman by Frédérique Molay, (originally published by Fayard and winner of the Prix du quai des Orfèvres) and Treachery in Bordeaux by Jean-Pierre Alaux and Noël Balen (first of a 20-strong bestselling series published by Fayard).

It’s no accident that these three works are all crime novels. “Our policy is if we love it, we’ll translate it,” Trager says. As a devotee of crime fiction since she started reading Nancy Drew, Trager knew Le French Book would start there.

The company is not handcuffed to that genre, however. “A good book is a good book,” Trager emphasizes, “no matter what, no matter where.” Accordingly, Le French Book also has its sights set on thrillers, short stories, and nonfiction, especially self-help literature.

But Le French Book isn’t ruling out expanding beyond “digital first.” Trager wants to reach as broad an audience as possible “through e-books, through print books, through audio books, and through whatever else may come in the future.” The statistics are on her side. Reports from Publishers Weekly and The Guardian indicate that fiction — notably genre fiction — drives e-book sales. In other words, Treachery in Bordeaux may translate to lucre in America.

In addition to their rising popularity among readers, e-books have several points of appeal to publishers, as Trager is well aware. “When you produce an e-book, the distribution networks are easy to get into,” she says. “You don’t have to deal with stock and storage and so forth,” which means faster time-to-market for Le French Book. “It allows us to move a little bit more quickly to get these books out, to start building buzz, and to see how they work before we move on.”

Seeing how they work is particularly important, given the nature of the American relationship to French literature. Much of what Americans know are the classics, whether they’ve actually read The Hunchback of Notre-Dame or just seen the Disney movie. A lot of the French-to-English translation done up until now is by university presses, Trager points out. “What is translated tends to be very literary and is sometimes a little bit harder to access for a lot of readers.”

As an American who has lived in France since 1985, Trager is well positioned to correct this imbalance. She speaks the language, follows the press, and, of course, reads the latest books. Because of her efforts, more Americans may start reading them too.

DISCUSS: Would You Read Sex Advice from a Brazilian Prostitute?