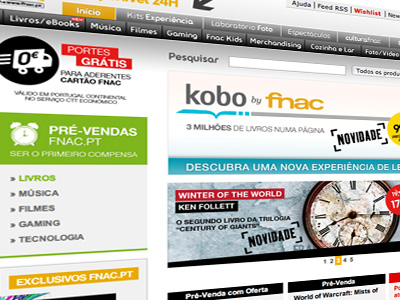 Today Canadian e-book platform Kobo announced a new partnership with FNAC Portugal to bring Kobo’s platform and international selection of digital titles to Portugal, along with local content. The Kobo Touch e-reader will be sold through FNAC Portugal’s stores and website for 99 euros.

“The Portuguese language is the common heritage to four percent of the seven billion inhabitants of the planet, across five continents. We feel this entry into the Portuguese eBook market is a priority for FNAC due to its growth potential,” said Cláudia Almeida e Silva, General Manager FNAC Portugal, in a prepared statement.

FNAC Portugal’s website now links directly to a Portuguese landing page on the Kobo website. Though much of the content on that landing page is still in English and you have to look hard to find any Portuguese authors, the page will presumably start to reflect Portuguese readers’ preferences as more customers begin to use the Kobo platform.

Shortly after Kobo was bought by Japanese e-retailer Rakuten, Kobo spoke with Publishing Perspectives about its international plans going forward.