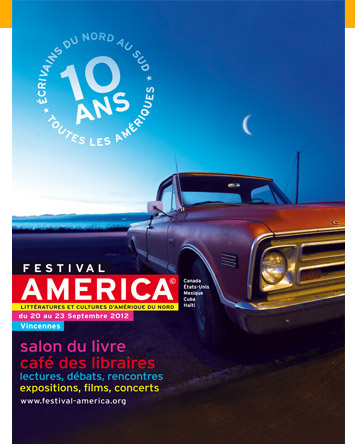 Festival America showcases many of the top writers from both North and South America. Organized in Vincennes on the outskirts of Paris, Festival America is the brainchild of Albin Michel editor Francis Geffard. His passion for American literature most likely began during adolescence, he has said, because of America’s omnipresence in music, films and later in the novels he read. His fascination extended beyond just American pop-culture: his interest in all things having to do with American Indians led to the creation of a collection called Terre Indienne (Indian Land) at Albin Michel.

Armed with the support of publishing companies big and small, a veritable battalion of volunteers and his passion for the Americas, Geffard organized the first festival in 2002, allowing the French public to discover writers young and old from across the Atlantic and creating an environment in which visiting authors could get to know each other.

Despite the all-star lineup of North and South American authors, the festival’s atmosphere is closer to that of the smaller, animated and wide-ranging events Geffard organized at the much-loved independent bookshop Millepages than to the atmosphere of a star-studded extravaganza.

Visiting writers are able to meet at the Festival America in informal settings or during conferences on literary themes such as family, childhood or relationships. Geffard and his team will draw from the rich resource pool that is the authors present by organizing discussions on how books are born, what it’s like to be a professional writer or journalist, and ponder on whether a writer is a political creature.

Given the multi-national nature of the event, writers will speak in a variety of languages, including French, English, Portuguese and Spanish. In order to make events accessible to anyone, regardless of language barriers, the Festival has teamed up with volunteer interpreters from a Paris school specialized in translation and interpretation.

The Festival has also forged a partnership with the Syndicat de la Librairie Française (the French booksellers Union) to get young booksellers involved and meeting authors. To that end, a professional day will take place during the Festival, during which translations and rights will be discussed and literary criticism on both sides of the Atlantic will be compared.2012 is also the 520th anniversary of the discovery of the American continent. To remind visitors that the Americas existed before the arrival of Christopher Columbus, the Festival will feature a series of events and film projections honoring indigenous peoples from Inuits to Indians across North and South America.