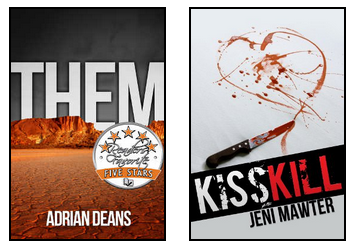 Digital publishing startups are sprouting up in Australia, where they may be late to the game but still see a wealth of opportunity in their (spacious) backyard.

In Australia, a pair of entrepreneur publishers have decided, independent from one another, to take the matter of digital distribution and publication into their own hands, rather than wait for the changing industry to find them Down Under. Really Blue Books is focusing on commercial fiction and YA.

Really Blue Books, launched late last year, claims to be Australia’s first independent digital-only trade publisher, anxious to help local readers find local writers without having to leave their own economy to do so. So far, they’ve launched 6 titles to good reviews, with 8 more in the pipeline. “Random House and The Bookseller follow us on Twitter. We must be doing something right,” boasts Sarah Bailey, the publisher’s founder.

They may be, but it appears that they aren’t going at it alone after all. Xoum is another independent publisher that was founded in Sydney in 2011 by a trio of publishing and design professionals. David Henley, Jon MacDonald, and Rod Morrison have a collective forty years of publishing experience between them, and have decided to go all-in with every possible digital product even remotely related to publishing, pumping out a list that consists of general interest fiction, non-fiction, e-books, e-magazines, and the occasional audio book, app, and even game.

Both start-ups are keenly aware that “the little guy” Down Under is late to the party, but that there is a wealth of opportunity to be found in their (quite spacious) backyard. Really Blue Books spouts a more grassroots sensibility than Xoum. “We are definitely about offering opportunity to writers, to have their voice heard in the global marketplace, while also offering readers a repository of quality work from a majority base of Australian and New Zealand authors. We are very hands on and personal in our approach to publishing, and like to include the author as much as possible until both sides are satisfied. Despite having no profile pictures yet on our website of our staff, we try not to behave like a faceless corporate!”

Xoum’s website offers an intriguing, and far loftier, manifesto: “Our publishing model embraces the shifting roles of facilitator and creator.” Their three-pronged summary reads: “Local in conception. Egalitarian in Production. Universal in dissemination.” The latter, sounding somewhat like the prologue to a Superman comic book, begs the question, What do they mean, and how is it a unique venture for Australia? “This is the most exciting time to be in publishing in 600 hundred years, but in order for our industry to grow and prosper, we must adapt and innovate and strive to do things better. The traditional publishing model is out of date,” says Rod Morrison. “The new model requires new tools and new ideas; it favours those who can adapt and embrace change, and it will reward those who implement a more equitable creative relationship. Xoum’s role is to provide the best possible editorial, promotional and financial support; in return, we ask our authors/creators to participate in all aspects of their product’s evolution, from production to promotion and beyond. Our creators come from all walks of life, but are united by the fact they are all brilliant exponents in their chosen fields.”

In a way, it seems that flattery to the writers may very well get them somewhere. While authors in the U.S. and elsewhere on the digital trail have grown accustomed to being trotted out through social media to share their wares, it’s been viewed by many as a burden; an expected burden in the age of shrinking marketing dollars, but a burden still the same. Both Really Blue Books and Xoum work to make their writers feel empowered by their partnership.

So, if authors are wearing all of the different hats that are required for putting their books together from brain to digital shelf, why can’t they just cut out the publisher altogether? Bailey firmly believes that the writer still needs her. “I still believe that a publishing house is what imbues value and conveys this to the customer,” says Bailey. “They are the trusted gatekeepers in a sea of poor grammar and spelling mistakes.” The partnership allows both author and publisher to feel deeply rooted in their products, in a more personal way. Says Morrison, “Our first responsibility is to our local creators — to help them develop the very best products and promote them tirelessly. This is consuming all our time at present!”

Still, it seems that no matter how much initiative the little guy has, no one can go at it alone to face a global marketplace. Really Blue Books uses their own website as a main point of sale, but they’re also feeding into third party distributors, such as Amazon, Google, Kobo, Firsty Fish and Wheelers eLibrary Platform. “We are, of course, constantly evaluating this and widening our reach in the marketplace,” says Bailey. “Digital changes almost month to month so we’re always looking at our position and what new options become available to us over time.” Xoum will also be doing both. “Our aim is for our titles to be available on all devices via all channels.”

In the long-view, what’s refreshing is their roaming optimism. “Just when you think our first year can’t get any better, a new surprise comes along,” says Bailey. “It’s such an exciting time to be in the industry in the midst of this digital apocalypse, and I’m more content than Garfield after lasagne (yes, that much). Digital is exciting because it allows books to be created quicker and distributed wider on an instant basis, and the risk is not so great, meaning we can take a chance on a lesser known name or even debut author without having to jump through the hoops that an established traditional publishing house does. It’s a license for literary freedom!”

There is also a concrete reason to believe that things in Australia will stay on the upswing: “Industry stats prove that more people are reading more than ever before,” says Morrison. “Gone are the days when publishers can think only of that small percentage of people who call themselves ‘book lovers;’ everyone who has a device is a potential customer.” So far, the new publishers have found that the Australian customer has an insatiable appetite for commercial fiction, though both will happily keep their inboxes open to other niches, with Really Blue Books fostering a lot of YA talent. “The young adult titles came about simply because they were some of the better work in our virtual slush pile. We don’t have a particular genre focus and don’t plan to develop that way. Instead we intend to keep our interests broad and only publish the works that we enjoy most and believe our customers will enjoy. It’s all about the quality. If it’s a great work, then expect to see a contract in your inbox.”

Bailey is hopeful that other emerging independent publishers in Australia (and New Zealand) will swell in their wake. “It’s quite possible that they’re out there and just struggling to find an audience and media time as all start-ups do. I hope that there are, and that together we can build the digital publishing industry in Australia into a legitimate force and community of readers.”

DISCUSS: Time Running Out to Advertise in Our Frankfurt Show Dailies