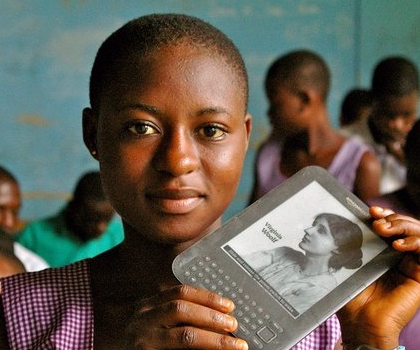 Worldreader, the European and US non-profit organization, has partnered with Simon & Schuster, HarperCollins Publishers (Canada), Egmont UK, Rosetta Books, Hardie Grant Egmont (Australia), and Ripley Publishing to help expand upon their mission of making digital books available free of charge to children in the developing world. (As of June 2012, Worldreader has distributed over 200,000 digital books to children and teachers across four projects in three sub-Saharan African countries: Ghana, Kenya, and Uganda.)

Children in the program have access to e-readers loaded with Worldreader’s e-book reading platform, and will now be able to read to eBooks from authors including Michael Morpurgo, Roald Dahl, and Kurt Vonnegut. (The new partners join others including Random House Inc., Penguin Young Readers Group, Puffin, as well as authors Seth Godin, Cory Doctorow, and Mary Pope Osborne.)

In addition, Worldreader and the Caine Prize have formed a partnership that will allow the Worldreader app to publish some of their prize winning short stories. (The prize is given annually to the best original short story by an African writer, whether in Africa or elsewhere, published in English. The 10,000 pound prize was founded in the UK in 2000, and was named in memory of the late Sir Michael Harris Caine, former chairman of the Booker Group. In fact, because of the award’s connection to the Booker Prize, the award is sometimes referred to as the “African Booker.”)

Worldreader said in a statement that, “Since its inception in 2000, the Caine Prize has stood for high calibre short fiction on the English African writing scene.

Worldreader is very excited to announce that we have formed a partnership with the Caine Prize and are working with the first ten recipients to publish their work on the Worldreader Book App. This means that their stories will be available, for free, on Internet-enabled mobile phones the world over. Readers in Africa will have unprecedented access to some of their continents’ most compelling short fiction, and readers on other continents will have a chance to get to know Africa through the words of its people.”