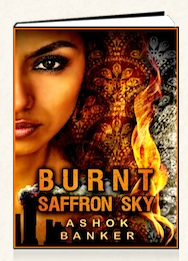 Expect to see a flood of new authors from India, especially now that they can sell books in rupees.

The Kindle Publishing Direct’s DIY publishing service was introduced to India alongside the ‘India Kindle Store’, as we discussed yesterday. It is most likely to lead a flurry of books by new authors in India, many of who find it hard to capture the attention of a “traditional” publisher. Recent successes in commercial fiction by social-media savvy young authors, who are able to promote themselves well, have inspired many among the youth to get published. This trend, coupled with the transitions taking place in the industry value-chain since liberalization of India’s economy, is bound to nudge even established writers to directly reach readers through e-books.

The Mumbai-based prolific author Ashok Banker, known for the bestselling Ramayana Series (Penguin Books India), has been publishing his work on digital platforms since 1995. “At the time, almost nothing that I wrote was being published. Even as that changed and I began to find success with traditional publishing, I enjoyed the direct contact with readers. Every book I’ve written in the past 18 years has first been shared online by thousands of readers and their feedback has been invaluable in building my career,” he says.

By the time Banker decided to use the KDP service to set up his own e-book store, AKB eBooks, in 2011, he had given away close to 60,000 e-book editions free. “The readers were the ones who began suggesting that I begin charging them so they could repay me for enjoying the books!” Banker’s method as a writer has been to create and complete an entire book series before handing it over for publication. But his publishers would space out the release of each title in the series, for marketing reasons. But now, “I reduce that time lag for those readers eager enough to purchase e-book editions. But every single one of them goes out and buys the print edition later.” For an author the attraction of e-book publishing might not always be about the costs of publishing. “It is the ease and low cost of distribution and purchase,” says Banker. His readers can either opt in for a subscription scheme ($49/Rs2,700 for 50 e-books in a one-year period) or buy single titles. “KDP is excellent. It is the best platform for authors to publish, or publishers to release e-books.” Banker, whose readers are “pan-global” will soon expand his store by taking his books to other platforms like iBooks and iTunes, Smashwords etc. “But some, like B&N [PubIt!], which only permits US authors to publish on the Nook — another form of the industry bias that comes from traditional publishing — are inaccessible.”

But while the technology and platform may mean more choice for readers and authors, “without editorial intervention we will also see a lot of bad writing being offered to readers,” says Urmila Dasgupta, principal agent at Purple Folio, a literary agency based in Delhi. “Authors may not really benefit a lot from choosing the self-publishing platform unless they also are aware enough to be able to work on the craft of their writing, which many aren’t.” Dasgupta says she would certainly recommend self-publishing as an option if her authors are keen on it, but after they exhaust all chances of being published by a publishing house.

For independent publishers in India, the India Store might prove to be a way out of the crushing pressure of wading through book distribution and retail in a fragmented market. They can go straight to the consumers. K.P. Suresh, General Manager of Books for Change, an independent publishing company in Bangalore, expects that Kindle editions will generate far more sales than the e-book editions sold through Infibeam Pi and Wink (EPUB/PDF formats). Both these Indian e-ink devices, and their complementing stores, were modeled along the lines of Kindle. The reasons for their lack of success are to do with technology-related problems and poor marketing. Suresh says, “Amazon has bigger pockets.”

Although the KDP service was always available to authors and publishers in India, the problem was in conducting transactions exclusively with the US dollar. Many authors have been dissuaded from using the service, says Fernandes, even though they wanted to be on the Kindle platform. Even Banker, who neither had a US bank account nor a local account that could accept a USD wire transfer, had to collect his royalties through cheque thus far, “which took weeks to clear.”

Banker’s e-book store has sold close to 30,000 e-books, at prices ranging from $2.99 to $89.99 (for the series collections), up until the the date of the India store launch. He has already revised his pricing for the Kindle India Store. “Within two days, I’ve seen sales increase tenfold! After dropping prices for INR buyers, I’m now seeing sales running into hundreds within a day. I was ready for this and am taking full advantage of it.” It is not just English-language publishing that is growing in India. Publishing markets of Indian language books are expanding robustly. For it to reach deeper pockets in India, Amazon will have to make Indic-scripts compatible with Kindle. Currently, the KDP service only accepts files in the Latin script. Files in Indic scripts converted to the Kindle format through other conversion services are readable with the help of additional software.

Neeta Gupta, publisher of Yatra Books, a Hindi imprint, points out that Indian language publishing will need to upgrade to new technology. Many typesetters continue to use pre-Unicode fonts, while available DTP software programs don’t support all functions of Indic fonts. One of the advantages that the Wink devices had offered when it launched last year was support for Indic scripts. Indian-language publishers — like Kalachuvadu Publications (Tamil), Vani Prakashan (Hindi), Rajkamal Prakashan (Hindi), DC Books (Malayalam) and Padmagandha Prakashan (Marathi) — made some e-book editions available through the Wink Store.

A contributing editor to Publishing Perspectives, Vinutha Mallya is an independent publishing consultant and editor based in Bangalore. You can reach her on Twitter @VinuthaMallya.