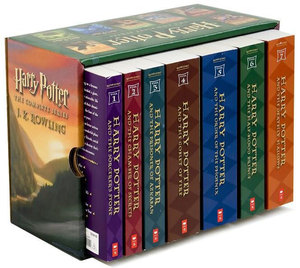 What are the best-ever teen novels?  NPR asked, and over 75,000 listeners responded.  Here’s the top fifteen:

12.  The Hitchhiker’s Guide to the Galaxy (series), by Douglas Adams

9.  Looking for Alaska, by John Breen

4.  The Fault in Our Stars, by John Green

3.  To Kill a Mockingbird, by Harper Lee

The list, perhaps naturally, tilts toward the new vs. classics, with the number one choice, the Harry Potter series, probably no surprise to anyone at all.  There were, though, a few surprises.  The author with the most titles on the list?  John Green, whose popularity among young readers is apparent with a startling five.  The oldest title to make the list?  Robert Louis Stevenson’s 1883 classic, Treasure Island (closely followed by Jack London’s The Call of the Wild, and Lucy Maud Montgomery’s Anne of Green Gables.  But where’s Tom Sawyer?  Little Women?  Or, one of my personal favorites, Madeline L’Engle’s A Wrinkle in Time?  (She’s represented at #63 with A Ring of Endless Light, but…come on…)

Of course, lists like this aren’t really “definitive” – they’re meant to stir up debate.  So what would make your list of the “best-ever teen fiction?”  Let the debate begin!