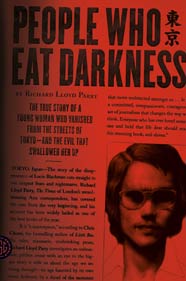 For many readers, the perfect summer read is nothing more a simple page-turner (not that there’s anything wrong with that); gripping enough to keep one’s attention while lying in the hot summer sun working on getting the perfect tan. Others, despite the heat, demand more than empty calories from their summer reads, requiring substance along with their excitement. Let me suggest to both groups, then, the perfect meeting of thrills and substance: Richard Lloyd Parry’s brilliant The People Who Eat Darkness: The True Story of a Young Woman Who Vanished From the Streets of Tokyo – and the Evil That Swallowed Her Up (Macmillan). (Isn’t the title alone enough to grab your attention?)

“Lucie disappeared on Saturday, July 1, 2000, at the midpoint of the first year of the twenty-first century. It took a week for the news to reach the world at large.”

The story is as simple and basic and horrifying as the title suggests: A young British woman, Lucie Blackman, working as a hostess in a club in Tokyo’s Roppongi district to earn money to pay off debts, vanishes, seemingly without a trace. By page sixteen, the reader knows that by the time the “missing” posters were being printed and distributed, Blackman was already dead. But what Parry accomplished was to write a nail-biting thriller (What happened to Lucie? Who was involved?) that also turns into an examination of (among other things) Lucie, her life and her family; the media and publicity; the Japanese police department and court system, Tokyo’s “entertainment” district, and Japanese “otherness;” differing ways of grieving; the lives of Koreans living in Japan; and  evil and our inability, in the end, to truly understand it. And much much more.

Reviewers have compared The People Who Eat Darkness to Truman Capote’s masterpiece, In Cold Blood. For me, it more than stands up against Capote: I found it thrilling, fascinating, chilling, impossible to put down, and a look into a culture and lives that were very foreign to me. And really, what more could want from a summer read?