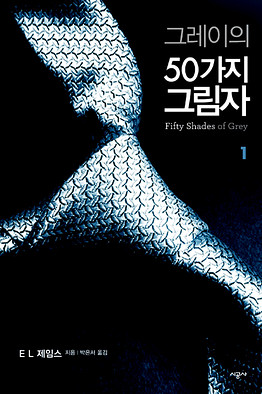 Korea Times‘ Kwaak Je-yup reports that after its release on August 8, E.L. James’ blockbuster bestseller Fifty Shades of Grey, immediately became South Korea’s bestselling novel and e-book.  More than 150,000 copies of “Grey” and its sequel Fifty Shades Darker, released on August 16th, have been sold in the first two weeks, according to its publisher Sigongsa. (The final book in the trilogy, Fifty Shades Freed, has not yet been released.) And as The Wall Street Journal blog, “Korea Real Time” points out; the success of the e-book edition might just be the shot in the arm that South Korea’s digital market has been looking for. The electronic version sold more than 7,000 copies in its first ten days of release, an impressive figure given the country’s relatively small $17.6 million e-book industry. As ranked by Yes24, the nation’s largest online bookstore, Fifty Shades of Grey is in the #1 spot on the e-book listings; #5 in the paperback, and the digital version has accounted for 19% of total sales, three times more than the average of 6%. (Che Geun-hyung of Sigongsa told Korea Real Time, “In Korea if an e-book sells around 10,000 copies, it’s considered a huge success,” while going on to add, “In the past, the e-book industry was dominated mainly by office workers, but this book lured female readers in the 30s and 40s.”)

And what Kwaak Je-Yup makes clear is that the trilogy’s base story, poor woman meets rich man, is one already hugely popular with female fans of Korean soap operas. The difference, of course, is in its explicitness, with what Je-Yup calls “a copious amount of sex rituals.” Another difference? The ways in which the Korean translator, who worked under a pen name, attempted to fix what Christine Sheehy of the New Zealand Herald called the original’s “exceedingly awful descriptions…which would almost certainly be worthy contenders for the Literary Reviews’ Bad Sex in Fiction Award, were that prize not limited to literary novels.”

According to Ms. Kwaak, James’ “messy graphic sex fantasy” becomes more “tolerable” due to the translator’s choice of metaphors over more explicit word choices, making even the book’s infamous sadomasochistic sex rituals “feel demure in comparison.” And interestingly, because word repetition is not seen as a “grammatical crime” in Korean, the author’s seemingly excessive references to Anastasia’s ‘inner goddess,” do not come across, in translation, as irritating. And while Ms. Kwaak acknowledges that the translator did manage to somewhat improve the “devastatingly unnatural dialogue,” she concedes that “at some point in this 780 pager, especially in the Korean publisher’s two-volume form, the reader has to feel frustrated by one too many uses of ‘God, he’s sexy.’”

Huge sales, an excited publishing industry, and disgruntled critics. Some things, apparently, are universal in any language.