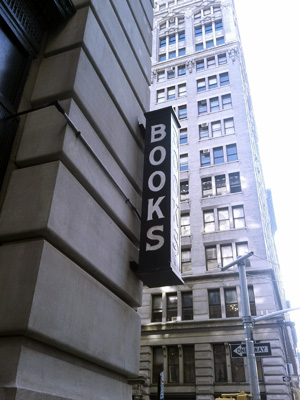 Whether you commit money to save a bookstore via a crowdsourcing site or decide to buy books instead, everybody wins.

Inreasingly, bookstores around the globe have turned to crowdfunding sites like Kickstarter and Lucky Ant to raise cash in order to keep the doors open. The sites offer bookstores a respectable means of asking for what might otherwise be perceived as mere charity. The crowdfunding sites give the bookstores an easy mechanism for giving those committing money to get something in return — be it a gift certificate, a bookmark, or an ongoing discount at the store. What’s more it offers booksellers the opportunity to reach well beyond their local geographic area. I for one am a big fan of St. Mark’s Bookstore and am pleased to have the opportunity to support them, however modestly, though I only have the opportunity to shop there when I visit the New York City and can find the time to go out of my way to do so.

Of course, crowdfunding begs one question: would the contributors’ money be better spent simply buying books from the store? The answer is, ironically, perhaps — no, considering that booksellers make only a modest profit on each book sold, typically somewhere less than 50% of cover price (less discounts offered, shipping, etc.). Crowdfunding sites take a small commission — Kickstarter takes 5% for example — with the rest of the cash going to the benefactor.

Still, at the end of the day, whether you commit money via a crowdsourcing site or decide books, it really doesn’t matter — either way, everybody wins.