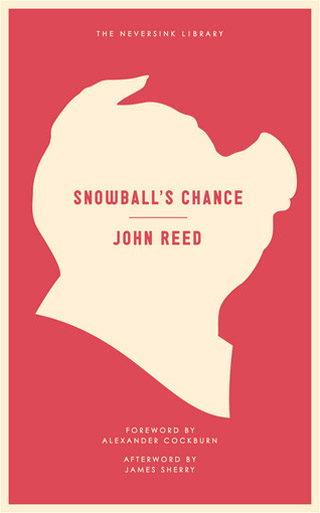 In the charticle that follows, Reed reflects on the decade in publishing, based on his experience writing and publishing his book, Snowball’s Chance. Snowball’s Chance by John Reed. When the book came out, I related. I had the spirit to make a few insurrections—went to a Christopher Hitchens right-wing diatribe and corrected him from the audience when he talked about  me. At my readings I drank more than usual and encouraged my audience to drink more, and to contribute animal  sounds. I gave out rubber animal noses. (Oh, I wrote Snowball’s Chance just after 9/11: Snowball returns to Animal Farm, brings capitalism.) Then nine years went by, and, uh, I looked at the book again; a tenth anniversary reprint was in the works. I called James Sherry, the original publisher. The prose melted when I tried to read it. The thing was nonsensical. “James,” I asked, “I don’t understand anything in here, what does that mean?”

Ten years. Just long enough to think, times weren’t so different, and just long enough to remember, yes they were. In 2002, blogs were for tech-savvy dweebs. Amazon was a book & crap bazaar. The Village Voice had a literary supplement, and cost one dollar. To find an article in a magazine, you had to get out of your chair, go outside, and go find it. To research a subject, you went to the library. People didn’t throw up boutique lit journals in an afternoon. (I have one going official in September: statorec.com) You had to print on paper. You had to spend money, printing on paper, to have a publication. And then again, everyone made more money. Critics, writers, agents. And yet, why don’t I yearn for 2002? 2002—the end of an age. 2012—the beginning of a new age. But how to compare? What does one compare?

And in what context?

Brooklyn-based writer John Reed is a provocateur. During his time as books editor of the Brooklyn Rail, he’s devoted pages and pages to the obscure, esoterica and genre-busting, much of it originating foreign lands. As an author, he has demonstrated a dexterity to move from a conventional historical coming-of-age novel, A Still Small Voice (Delacorte, 2000), to Tales of Woe (MTV Press 2010), a collection of crushing and bleak essays about human misery and suffering. In between he’s produced three highly regarded satirical works: a novel The Whole, about a sinkhole that consumes four US states that turns into a media circus (2005, MTV Books); All the World’s a Grave: A New Play by William Shakespeare (2008, Plume) — which reconstituted lines from a half-dozen of the Bard’s plays to create an entirely new work — and Snowball’s Chance, a riff on George Orwell’s Animal Farm recast for a post-9/11 world. That last book was originally published by tiny Roof Books in 2002 and became a bestseller; now, a decade later, it has been re-issued by Melville House.

DISCUSS: Who Benefitted Most in the Last Decade of Publishing?