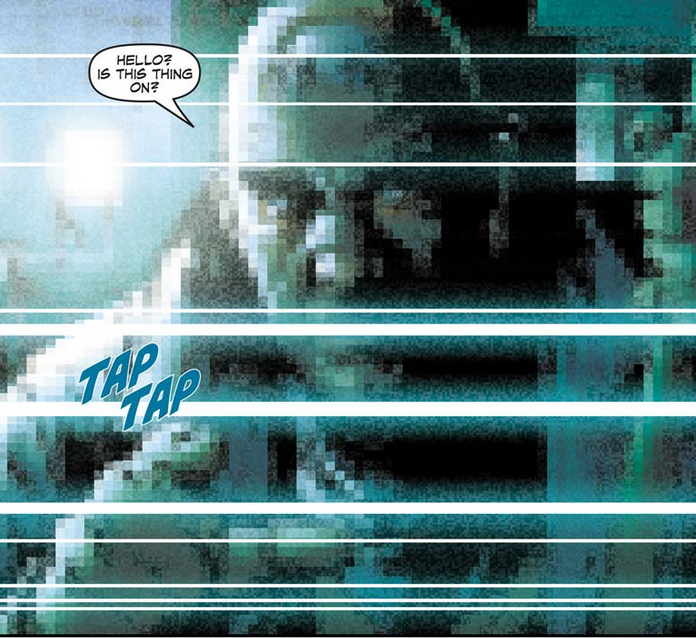 The first panel of Thrillbent's Insufferable

Mark Waid began his career as an editor at DC Comics in the 1980s, before moving into writing and winning acclaim for his work on many of the most iconic characters at the major publishers. In 2012 however he sold his personal collection of “Silver Age” comics to fund the digital start up Thrillbent, which he co-owns with his business partner, TV writer/producer John Rogers. The site, which dubs itself “Comics for the rest of us,” is a digital-first publishing start up offering serialized editions of original comics, and is helmed by an a-list of top comics professionals. The concept is to be able to “experiment” with the medium, rather than “kill print.” Recently Publishing Perspectives‘ spoke with Waid about why he struck out on his own, the challenge of finding a new audience and the creative possibilities of digital media.
“Five years from now, I’ll look back on selling my collection and think it was either an uncanny marketing strategy, or the dumbest thing I ever did,” says Waid. “But a year ago, when we really started thinking about Thrillbent, I realized it was my greatest asset financially, something I’d been building since I was four years old. And I felt that it was time to leave the past behind, to move to the future.”

Waid traces his interest in digital publishing back to a discovery he made while working as editor-in-chief at BOOM! Studios, an independent publisher in California. In spite of the success of movies based on comics characters, the industry itself was in dire straits. Sales had been in decline for two decades, and as circulations plummeted so print costs soared, eating up all profits. “I just didn’t see it getting any better. So at BOOM! I campaigned to move into digital, and we conducted a few experiments.” The problem for Waid and other publishers was that since comics disappeared from newsstands in the 1990s, the majority of titles are now sold through a handful of specialty stores that are very protective of their turf. Not only is their reach limited — 50% of them are based in New York, Texas, California and the Chicago Metropolitan area, but, says Waid “…there is a network of 1,700-1,800 stores and that’s it for the entire world. Diamond, based in Baltimore, is the sole distributor. The retail network viewed digital as a direct threat to brick and mortar stores, and that small retail base is a powerful force. If they get pissed off, they might threaten not to order your books. So publishers are trying not to upset the apple cart, and the movement into digital has been slow. Now these stores have kept us in business, but we can’t let 1,800 outlets dictate the future of the medium. So one of the reasons I broke away from BOOM! was to explore digital as an independent agent, so the entire company would not be in danger of retribution from retail outlets.”

Hostility to Going Digital Only

As Waid plunged into digital publishing he experienced push-back from the highly consolidated retail market that regularly crossed the line into extreme hostility.

“I’ve been screamed at on convention floors, and had stores ban my books from their shelves. I take some of the responsibility — I didn’t frame the conversation correctly. I should have made it about how digital and print can grow together. Instead, I let it be framed as digital versus print.”

Thrillbent has been up and running for five months now, and the anger directed at Waid has begun to abate. Says Waid:

“The audience for comics in the US is very small — about 100,000 readers. No single title routinely sells in the six figures, and most of the books are bought by the same people. I’m more than happy to cede that audience to comics stores.”

Waid’s mission with Thrillbent is to expand the audience for comics, to use digital publishing to draw in new readers in a way that spinner racks in convenience stores did in the past: “How many iPads have been sold while you and I have been talking? That’s the new newsstand.”

Building an Audience Reader by Reader

Waid estimates that of the 40,000 readers who buy his titles every month, there is a serious core of at least 20,000 that follows everything he does. Reaching out to this following via social media is central to his strategy:

Waid’s first offering at Thrillbent is Insufferable, a weekly “dramedy” that answers the question: “What happens when you’re a crimefighter and your sidekick grows up to be an arrogant, ungrateful douchebag?” Waid chose a superhero story because it would be familiar territory for his pre-existing audience, and he thought it best to “play to my strengths”; however it is not at all representative of what he plans to feature on the site:

“With our series rollouts in August and September, I’m telling the creators — ‘For the love of God, run away from superheroes as fast as you can!’ In digital we can play with genres, which is virtually impossible in the print medium, where it’s virtually impossible to do anything but superheroes. For every success story like The Walking Dead which is in a different genre, there are literally 100 superhero comics out there. In America, that’s what people think comics are and my guess is that the reason more people aren’t reading comics is because they’re not interested in superheroes. After all, most people aren’t.”

And so in the autumn Thrillbent will start publishing a number of series that have nothing to do with capes and tights, including The Damnation of Charlie Wormwood by Christy Blanch and Chris Carr, a “Breaking Bad-style” crime story in which a college professor teaching in prison realizes that he can use the knowledge he learns from inmates to establish himself as smalltime crime kingpin. Another is James Tynion’s The 8th Seal, a political horror-thriller which, says Waid, had the best pitch he has ever hard: “When James told me it was one half West Wing and one half Rosemary’s Baby, I wanted to do it immediately.”

Publisher and Distributor, Rather than Rights Custodian

So is Waid now a digital mogul, who will be licensing his properties to movie studios for millions a la Marvel or DC?

“I view Thrillbent more as a distributor. We’re not asking for rights. We don’t want to own properties, we want to create an umbrella/distribution hub. In the second stage, we plan to create revenue streams, and will ask that if the creators make money, then they kick back a small percentage to us.”  Meanwhile he is scathing about comics designed as pitch documents for movies. “Why bother? If you sell something to the big studios, they’re going to change it anyway, so just tell the story you want to tell. Readers can tell when something is designed to be sold in a different medium, too — the pacing and tone is different. I’m not a believer.”

Waid plans to experiment with different monetization plans and is adamant about only one thing: “I believe in my heart of hearts that 99 cents is the sweet spot for a chunk of material. There’s no reason in the world why a digital issue of Amazing Spider-Man should cost $3.99.”

Waid remains a writer however, and he explains that as the venture has progressed, so the creative aspects of working digitally have become more fascinating for him than the business challenge. Writing for digital has changed the way he thinks about the optimum shape and size of a page, while he has been experimenting with effects impossible in print, such as making small alterations to panels at the click of a mouse, having images disappear and reappear, or suddenly shifting the focus in a panel from the foreground to the background.

Leaving the Print World Behind

“When I began Thrillbent, I was always thinking about ultimately going into print. I know I can sell a certain amount of copies of a book and make money that way. The further in I’ve got however, the more I’ve lost sight of print. There’s real joy in discovering new storytelling tricks, I can coast for a week on the happiness I get from figuring out something new. So now if I do some effect in the digital comic, and the old question comes up — “How are we going to turn that into a print comic?” I basically wave it away–we’ll worry about that later. Every week we find new stuff to do. A year from now, the comics we did at the start will look like The Flintstones.”

Waid intends that by the end of fall, Thrillbent will release new content on the site every day. But with his duties as digital distributor/impresario, plus his ongoing creative work for traditional print publishers, how does he find the time to do it all?

“I don’t. In the last six months, my girlfriend and her kids have found that the previously garrulous, pleasant companion they knew has become a creepy man in a bathrobe who lives in his office. But I’ve been fortunate — they’re very understanding. But comics are the thing I’ve been most successful at in my adult life. I want to continue, and if I need to adapt, then I’ll do it.”

DISCUSS: Do You Absolutely Need Social Media to Sell Books?