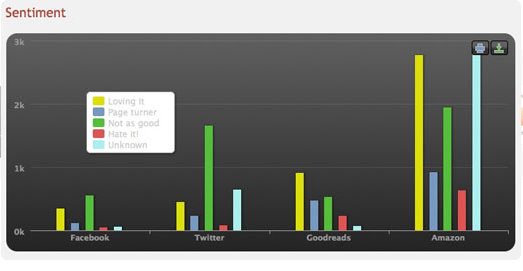 For a long time, publishing companies have tried to use analytics software originally designed for larger companies such as GM, whose interest in the social media spectrum doesn’t exactly match their own need to collect book chatter. There’s General Motors and car building and selling, and then there’s the publishing industry and books and, well, that’s that.

Suffice it to say, publishing has been on the wrong end of the analytics technology stick. What do publishers have to gain from using analytics anyways, besides, oh, everything? CoverCake, a new Silicon Valley tech analytics upstart created exclusively for the publishing industry, is trying to change that landscape with a subscription-based analytics tool.

“A part of our learning curve is that we needed to adapt enterprise-grade technology into a usable product for the whole publishing industry, and since to the book industry social media is still relatively new, a lot of people in publishing aren’t even sure what they need yet,” explains Todd Gibson, CoverCake’s Director of Product.

“They’ve been using tools that aren’t natively designed for publishing, such as Radian6 [“Social Media Listening, Monitoring + Engagement. Get closer to your customer.”] or Crimson Hexagon. Our focus and services are not diluted across 20 industries like all other social media tools.”

In case you’re not familiar with those two social media algorithm giants, Crimson Hexagon describes themselves this way: “Crimson Hexagon is the only patented social media analysis and Big Data analytics platform available today. We provide industry-leading social media monitoring and analysis software and services to global brands, agencies, media firms and their partners…our customers are able to tap into billions of online conversations taking place in social media and uncover not just keywords, but vital consumer about their company, products, industry, competitors and more.”

Simply put, CoverCake is a new Silicon Valley startup that is using very sophisticated algorithms to help book publishers get their hands on the numbers and people they need so that they can spend their marketing dollars more wisely. “Publishers needed an all around tool to help them navigate social media landscape to adjust their messaging. There are 901 million people on [Facebook] (okay, it’s been determined that 83 million or so are spam accounts, but still). That’s a lot of people putting real information out there that has been otherwise untapped for its marketing potential,” says Gibson.

It’s kind of like being handed every focus group you could ever want to watch from behind the two-sided mirror, without having to organize the groups, or drop in to eavesdrop on every YA focused chat room. The magic of their algorithm software is that you plug in the search terms and it will do it for you. For example, say that (hypothetically) you’ve got the new Twilight coming out, but really, your marketing campaign is comme ci, comme ca. The social analytics information gathered by hasn’t been very good because there’s no technology that has been specifically built to do the targeted searches that you need. Laura Rossi Totten, a book publicist, uses the media relations software Cision, but says that it doesn’t pick up everything she’d like to see — especially when it comes to social media. “We really have to go digging around in an antiquated hunt and peck method to capture everything.  I’m working on Linda Fairstein’s Night Watch now, which came out in July. Google Alerts picks up some hits, but misses a lot.  And so, even with these resources, I still have to do daily social media searches.”

Getting the numbers behind the blogging names would also clarify some missing points for Rossi. “Sometimes you can know the immediate influence of a blogger if you see an uptick in Amazon sales, but often times you don’t have that information.”

Fifty thousand excited teenagers have talked about Twilight 5, but who’s had the biggest reach through social media? Joe FanSite, or Syndicated Book Reviewer? The CoverCake results are filtered by the relative influence of that person, and the valuable information rises to the top. And by the by, the chatter isn’t mostly from the adolescent chatrooms anyway, so you need to tweak those dollars, STAT. CoverCake worked to make this endeavor so easy that the complicated backdrop of the razor sharp technology won’t even be visible to the naked researcher eye. An easy dashboard affords you the simplicity of typing in a category that you want to do marketing research on.

CoverCake is a cloud subscription, which means no more messing with the IT guys (sorry, IT guys). As the product continues to improve (and it will), there will be no need for updates done on the home front—it will simply improve across the board for everyone who subscribes. Because the layout is straightforward and easy to use, the training needed to learn how to navigate the larger platforms is prohibitive in an industry where companies are already short handed and only getting more and more so. Bricks-and-mortar marketing strategies have also been quantified. “We know what’s possible, because the success or failure of those campaigns has been a known quantity.  For the book industry, social media research and campaign best practices are not fully established. You often don’t know how other social media campaigns were conducted, or how well they worked,” says Gibson. “The book industry is unique. It needs a different toolset that provides visibility and real usability for the layperson. What we’re doing is exclusively with publishing in mind. No other social media monitoring and analytics company has succeeded in the book industry without outsourcing their platform to a dedicated social media agency or necessitating highly trained specialists as proxies for platform access.” The industry is responding, in kind. “We’ve already signed public deals with both publishers, resellers and distributors. We’ve signed deals with Inscribe Digital, and Books-A-Million.”

The category search is a game changer for book marketers, who play their budgets like a Fortune Teller plays her crystal ball. Theirs has been a long-time obvious chicken or egg question — how the heck can you base a new marketing strategy on a conversation about a book that’s not out yet? CoverCake created a high level of automation that pulls together these conversations from a myriad of social media sites, from Twitter (of which they’re paying close, close attention) to, Facebook, popular blogs, Goodreads, Amazon, and more coming down the line like Google+, LinkedIn, Pinterest, and more.

The beauty of this is the speed of which it collects data; there aren’t Editorial Assistant elves plugging in new titles as fast as their little fingers can type. “Our system finds relevant books and intelligently searches for conversations without requiring human interaction,” says Gibson. “It’s an automated algorithm that you can interact with to fine-tune results. In other words, the time spent searching for the needle in the haystack is drastically reduced. Every other platform waits for the customer to come to them. We preload our books and feed our platform with relevant data, which means you also get historical data by default. We’re tracking thousands of content titles, and you can search for BISAC categories as well, not just for individual titles. “

There are flexible account and quarterly and monthly subscription levels, “and we’re working to make it accessible to the entire industry.” Hopefully, that will happen sooner than later.

Publicist Rossi-Totten would certainly like affordable access to a service, especially if it could serve as a silver bullet for her needs: “Every day I visit social media sites manually to search to see what comes up. For example, on Twitter it’s usually the author’s name that you can catch, since that’s their handle so we have to do detailed searches by title and key word daily. To capture social media by book title, and in chatrooms, would be incredible.”

DISCUSS: How Do You Quantify Social Media Impact?