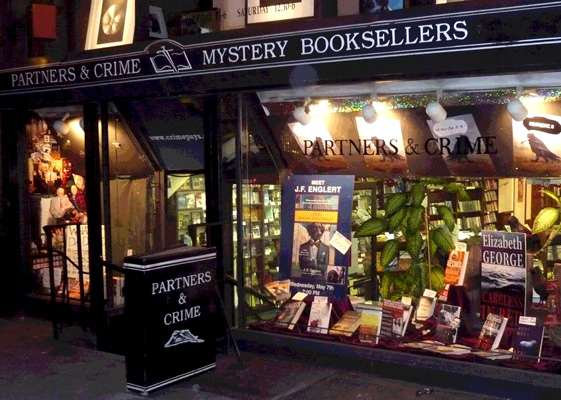 It’s just getting harder and harder to buy a print book in Manhattan, America’s publishing capital. Following on today’s feature story about bookstores looking to raise cash on the internet for survival comes the news that Partners & Crime Mystery Booksellers, a specialty bookstore on Greenwich Avenue in Manhattan that has been in business for 18 years, will close its doors for good on September 20th.

The owners, Maggie Griffin, Maggie Topkis, and Kizmin Reeves, believe that not one specific factor is causing them to meet their end. The clues, however, have been there for a long time, and to Topkis were illuminated by a seismic shift in the publishing industry. “For the first ten years that we were in business I worked on Sundays, and at the end of the day part of my job was to run the numbers from the previous week. For years, 25% of our sales were hardback books. Over time, that number got cut in half, and paperback became the larger percentage of sales… I  don’t think it’s specific to mystery at all, though.  It’s affected our shop in the exact same way as other shops.” Topkis, unlike many other indie bookshop owners, doesn’t place blame on their landlords. “Our lease is up, but our landlord is fabulous. None of our decision has to do with them. There’s not one factor. It’s a hard time for indie booksellers, and in bookstores in general.”

The shop’s windows were always stuffed to the gills with a combination of the latest thrillers and mysteries, from that Larsson guy to Lawrence Block’s rotation of hits, as well as a hefty collectible and rare books collection. The shop was a hub for a lot of neighborhood activities ranging from a weekly 1940s-style radio show in the backroom to readings from the greats: James Patterson and P.D. James, to name a few.

“For our customers the local bookstore is very much like the local bar. We not only know your name and what you like to drink, but we know what you like to read. You can hang out. It’s a safe place. I’ve had some of the most wonderful conversations with customers over the years,” says Topkis.  “I’ll miss terribly the people I didn’t know well enough to create a relationship with outside of the store, but who I saw weekly for years. I knew when their parents died, they knew when my mom died. I knew their kid’s struggles, and when they got engaged. I’m never going to see them again.”

There’s still time to get over to 44 Greenwich Avenue and help them close with a bang. Their having a huge sale, and it ends on September 20th