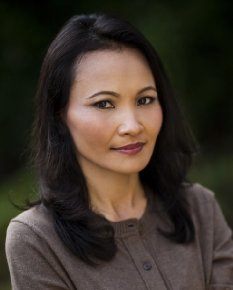 “As a survivor, I feel, I enter art to save — to immortalize — those I could not protect as a child.”

Vaddey Ratner novel In the Shadow of the Banyan was one of the most highly sought after galleys at this year’s BookExpo America. A featured “Buzz Panel” book, it offers a fictionalized version of her own childhood under Pol Pot’s Khmer Rouge and survival of the subsequent Cambodian genocide. This lyrical portrait of horror — as paradoxical as that may sound — has won praise from Publishers Weekly, which gave it a starred review, and author Chris Cleve, who called it “one of the most extraordinary and beautiful acts of storytelling I have ever encountered.” One of the most highly anticipated books of the summer, it is published on August 7 by Simon & Schuster in the United States. PP: You returned to Cambodia after many years away and lived for a time within your country. Can you recreate your first moments of return? What did you look for? What did you find? Beyond the return to the palace and the gift of rice, how did you spend your time there?

Ratner: The first time I returned to Cambodia was in 1992, thirteen years after our traumatic escape from the country, the whole experience still very much fresh and alive in my mind. Indeed, parts of the country were still controlled by the Khmer Rouge rebels. While their regime had collapsed in 1979, they hadn’t completely relinquished their grip, terrorizing the population with random abductions and killings and launching attacks against the government’s forces. Thus, you can imagine how my mother felt about my decision to return at this particular time. “I risked everything to get you out of there,” she said, her voice taut with love, and fear for my safety. “Now, you are going back.” The last leg of that journey, the flight from Bangkok to Phnom Penh, I remember, was full of overseas Cambodians, all of us on this joint return to the homeland we couldn’t forget despite our desire for a new home, or stop loving despite the bloodshed and brutality. At our first glimpse of Cambodia from the plane — the landscape like a tattered tapestry patched with arid rice paddies and stitched together by the flimsy threads of rivers and lakes during the dry season — we all simultaneously burst into tears. Only the beautiful young Thai flight attendants remained dry-eyed and composed, as if by now well prepared for this kind of homecoming. They did everything they could to give us our dignity, as if the entire cabin of passengers collectively sobbing aloud was nothing out of the ordinary. I found this particularly kind of them, for it allowed us to express, without shame or fear, our long withheld sorrow.

In Phnom Penh, among the first things I did was to visit all the places my father and I had frequented before the war, those first few happy years of my childhood. It took me a long time to build up the courage to go to our family estate. Once I went, I found only the charred remains of what might’ve been the bath pavilion. Everything else was burnt or destroyed — buried with the past.

Most devastating was letting go of the wan hope I’d stubbornly held onto through the years that perhaps my father was still alive somewhere, somehow. Having talked to the relatives and friends my mother put me in contact with — all those who’d survived the Khmer Rouge regime and remained in the country — it was as clear as ever that my father was gone. No one I spoke with had any fragment of information, not even the slight inkling that he might’ve survived. It seemed clear now his life was extinguished, as we’d always suspected, when he was taken away that morning in 1975. Still, even as I mourned him all over again, I saw him in everything that lived, that survived.

Since then I’ve made countless visits back to Cambodia and, with my husband and daughter, lived there again from 2005 to 2009. We have a home there now, a place we built ourselves. While my husband and I walked the land with its soaring palms and aging mango trees, I’d describe to him the various features from my childhood home and he’d pause to sketch, adding to our architectural plan. It was a deeply cathartic and powerful experience to build out of the ashes, to give rise to a dream.

How had the landscape, the flora, the gardens — all those charged details from your childhood — changed? How did seeing the evolved Cambodia affect the memories you had so carefully kept near in all the intervening years?

During my first trips back to Cambodia, the evidence of war was still visible everywhere in the city. But the beauty of the rural landscape remained. For all the man-made power of destruction unleashed on this land, it was no match for nature. I had witnessed this too as a child, watching the Khmer Rouge attempt to transform the landscape, bend it towards a utopian vision, only to be thwarted by the monsoon rains.

Cambodia is presently in a very intense phase of reconstruction, with skyscrapers rising in the capital, lakes and lotus fields filled in to make way for more buildings. All that concrete is hard on the eyes, and on the soul. Every time I return, I seek out glimpses of the lotuses that remain in pockets of water wedged in between new townhouses or shantytowns. The ability to see beauty, I feel, needs to be constantly cultivated and called upon to remind us how life strives for continuity, even amidst harshness.

Was it easier to write this story in the United States, or in Cambodia?

Describing the physical environment, mapping out the routes and scenes of Raami’s journey, invoking the moods and colors of the day in a particular season — all this was easier to do in Cambodia. The bulk of the story was completed there. After returning to the U.S., I found that once I threw myself into the story, I forgot what language I was writing in, and I was back in Cambodia, back in that time, reliving every loss and tragedy. The act of trying to articulate that experience in a different language kept me from plunging irretrievably into despair. Writing put me back in the immediacy of the tragedy, and yet saved me as well. In diving in, I was able to draw some sense of understanding when I resurfaced. So, achieving that immediacy was the vital thing, no matter where I happened to be.

What sense is most important to you as a writer? How difficult was it to render the many exotic details that grace your story? How were you able to sidestep explaining in favor of creating a story (with the story paramount) that was also easily understood?

Imagination is not a sense, but I feel it is the most important faculty. A writer can be blind or deaf, and still create. If you can imagine yourself in another person’s place, you can empathize, and empathy is essential for a writer, I believe.

As for exotic details, I don’t think of them that way. When I write of the color of young rice or the names of the rains, I’m painting an emotional landscape that my characters inhabit.

In writing this book, I felt my first duty was to honor the lives of my loved ones. In order to do that, I had to cast aside a hundred other possibilities. In choosing a character as young as Raami, it was not possible to philosophize or explain.  The world and its human relationships have to be shown to her in a way that she can grasp. A story constructed in this way also opens itself to a very wide audience, because it does not presuppose any particular knowledge or familiarity with the history.

By writing this book in English, you had to fully master a language not your own  Moreover, you had to translate the sound of your father’s voice — indeed, all of the voices—into English, without losing the musicality of your native tongue. Can you talk about that process a little?

Learning English as a second language, I was particularly attuned not only to the meaning but also the rhythm of words. In my heart I’d never left Cambodia, and it was vital to me that I preserve something of the quality of my native tongue even as I wrote in English.

What did reading Michael Ondaatje closely teach you about words? Which other authors taught you?

Michael Ondaatje writes in his novel, Divisadero, “Sometimes we enter art to hide within it. It is where we can go to save ourselves…” It’s true that as a writer I’ve often sought the enclosure of my art for its comfort and protection.  I’ve slipped into it both to hide and to be rescued. But as a survivor, I feel, I enter art to save — to immortalize — those I could not protect as a child. In moments when I am burdened by my survival, when I feel alone and long for the family I lost, I’d like to believe that, through my words, I’ve made them live again.

Is this book now being translated for Cambodian readers, and if so, are you doing that translation work?

I would love for it to be translated into Khmer. I have great respect for the art of translation, and know that being able to speak and write in a language is not enough. While I do speak and write Khmer, I’m not a writer in my language. I’d have to learn to be a writer in Khmer to be able to translate it myself. I do hope there is a writer out there, well versed in both Khmer and English, who could take up this task. To me, it’s not important that the translation be done soon but that it be done well, true to the meaning, intent, and spirit of the story I wrote.

What does it mean to honor a father with a story? What ideals did you articulate for yourself? What compromises did you refuse to make in the process of telling the story?

To honor my father in this story is to give him continuity. When I think how he forfeited his life to give me mine, I’d like to believe some part of me lives and strives now for the beauty, the goodness, he wanted me to see.

I never once relinquished the soul and core of this story, which, although set in the context of war and revolution and genocide, is above all about love and hope and beauty—beauty in the physical world, in language and poetry, in ourselves.

What is next for you?

We’ll see…that’s the exciting part—exploring the possibilities. I do have the filament of a second novel weaving in my head now. As I wrote to a friend and fellow writer, starting a new novel is a bit like falling love — you and the writing discovering each other. This initial part of the writing process is so deliciously intimate, when you don’t know exactly what you’re doing but your heart palpitates every time you approach it. You are full of hope and anxiety, and even if the relationship fails in the end, you’ll come out of it learning something important about yourself and the craft.

DISCUSS: Fact or Fiction, Is One Better at Presenting the Truth of Trauma?