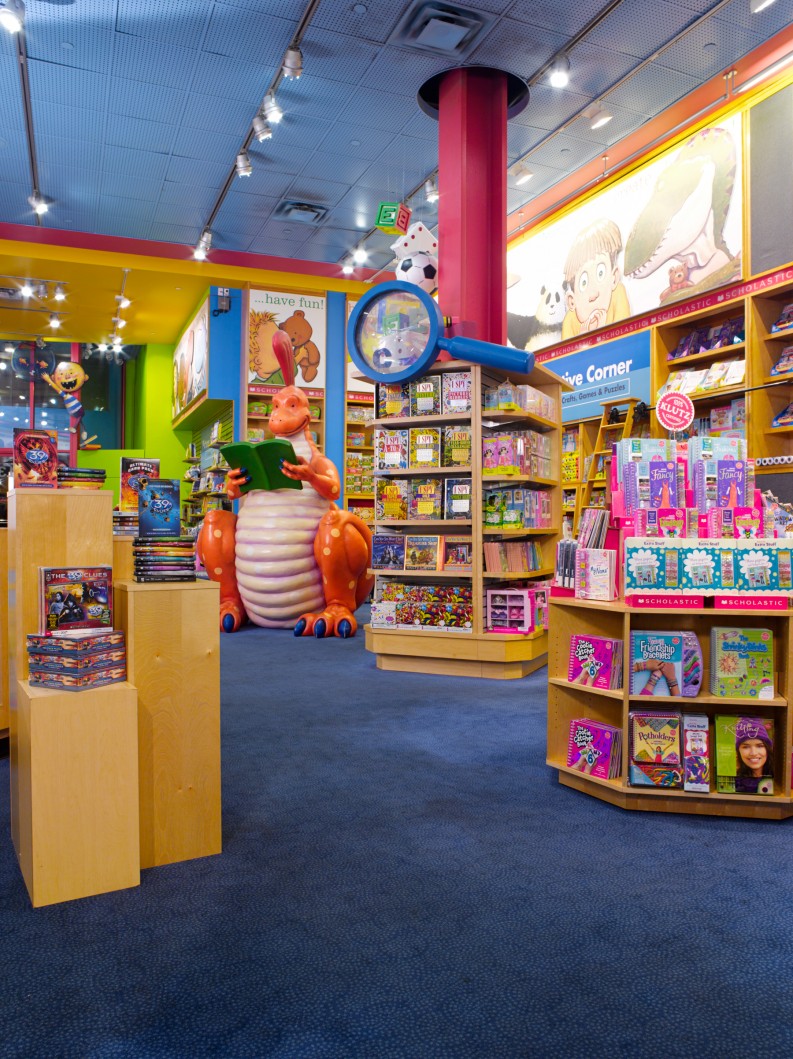 Not surprisingly, it’s the big brands that bring guests in.

For international as well as domestic tourists with children visiting New York City, a trip to Scholastic’s flagship bookstore, located in the heart of SoHo, is a must-stop one-stop shopping destination. With over 6,500 square feet filled with 30,000 books (6,000 titles) at any one time, the store is bound to have whatever the customer might want, whether they’re from Iceland, Iowa, or Indonesia. Michael Strouse, the store’s general manager, shared some observations about what’s currently hot: “Most of our international visitors, they’re looking for New York books — our New York section does really well,” he says. Among the most popular books are two published by Abrams, Joanne Dugan’s  123 NYC, and ABC NYC. In addition, books that are set in New York do very well — Eloise, for example, along with the rest of the books in the series, is a stand-out.

“We’re featuring the books of Geronimo Stilton in the window,” said Strouse, referring to the best-selling Italian series first published by Edizione Piemmi in Milan in 2000, and by Scholastic since February 2004, and whose title character, a talking mouse and best-selling author, lives in New Mouse City on Mouse Island. “We’re loving how many Italians are coming into the store because of it. Big Trouble in the Big Apple by Thea Stilton (Geronimo’s younger sister) is also doing well, but our sales have actually tripled in Geronimo Stilton titles.”

Not surprisingly, though, it’s the big brands that bring guests in. Harry Potter is still a big draw. Of course, the books continue to sell, and the products as well, especially the Gryffindor scarf, which is a top-seller even in the middle of summer. “Whether it’s because people can’t find it other places, I’m not sure. But we’re a store where there is a unique selection of Harry items and our customers know it.” The most unexpected best-seller according to Strouse?  The ‘I Survived’ series. “That threw even me a little,” he said. “It’s historical fiction, and it talks about all these big events in history through a kid’s point of view. Our international guests do really well with those. They not only teach reading skills but history at the same time.”

By far, most international customers are there to support their child’s reading and language skills by buying books, and lots of them, in English. “We have a really great guest who comes in four times a year and will ship home tons of books to India for his kids to keep their English skills sharp. He’s like a microcosm of what happens every day in the store — we see people coming in who want books to supplement their kid’s English skills.”

And finally, most customers, it seems, come in at least initially with something in mind before heading off in search of the unknown and undiscovered. Potter fans head to the Potter section; Clifford fans go to the dog house, I Spy fans go to the magnifying glass. “They all see the Scholastic name and see it’s a friendly environment. They say ‘wow’ and head off where they need to go.”