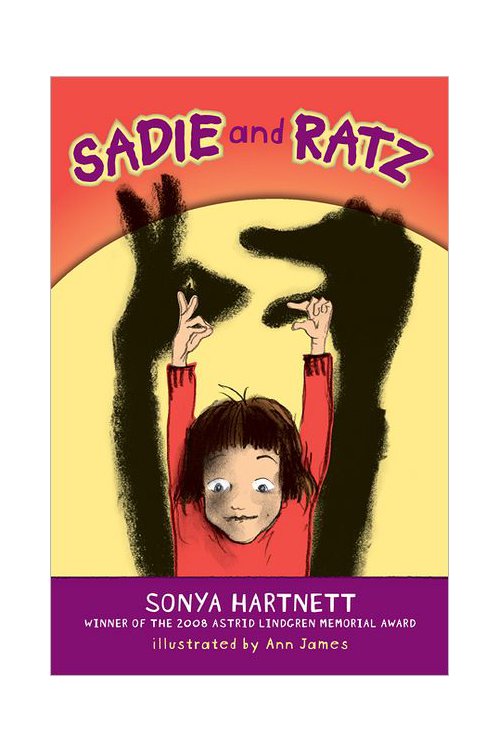 As a longtime children’s bookseller, homogeneity in the realm of chapter books is so consistent that when a book like Sonya Hartnett’s Sadie and Ratz comes along it commands attention, well deserved attention. Hartnett, an Australian, first came to my attention last year with the American publication of The Midnight Zoo, a haunting story of Romani children who come across an abandoned zoo as they are fleeing the Germans during World War II. A layer of magical realism carries the story from its grim beginnings to a hopeful ending as the animals and children share their stories and their belief that nature will right itself in the end. Harnett is an eloquent writer with a poet’s sense of conciseness. She also has a deep understanding of humanity which ideal for tackling difficult topics — especially in the world of children’s literature.

This understanding shines through in the slim but powerful Sadie and Ratz, a book about sibling rivalry and the often fierce emotions behind it. This may sound intense for a chapter book that is 60 pages long and intended for 5–8 year-olds, but Hartnett knows her audience and she knows how they think. In Hannah, her main character and narrator, she has created a voice that is immediately engaging and true.

Hannah lives with her mother, father and little brother, Baby Boy, although she would rather have a dog than a brother. In lieu of a dog, Hannah has a stick insect named Pin as a pet. And, as her father reminds her, she also has Sadie and Ratz, the names Hannah has given to her hands, who behave like wild beasts. When four-year old Baby Boy upsets Hannah by changing the channel, going into her room or using all the colored markers, Sadie and Ratz wake up and “jump onto Baby Boy’s head and try to rub his ears off.” Baby Boy cries, mom intervenes and Hannah is appropriately punished. Mom also suggests Sadie and Ratz try some calming yoga poses, and this is where Ann James’s charcoal illustrations shine. While mostly gestural, James captures an angry yell, a mischievous smile and an anguished look in ways that compliment Hartnett’s emotional story wonderfully. When Baby Boy turns the tables and starts blaming his own misbehavior on Sadie and Ratz, Hannah is mystified and silent at first. Tired of being punished for baby Boy’s bad behavior, Hannah considers trying to tame Sadie and Ratz and make them nice, but abandons that idea knowing it would “break their hearts.” Instead, she sends them away and in doing so renders herself blameless when the next accusation comes. With this shift, Hannah’s parents begin to see what has been going on and all eyes turn to Baby Boy’s hands. “Hooray!” Hannah yelps. This means that when Sadie and Ratz come home from vacation they are “going to meet two new friends.” This might even signal the beginning of a friendship between the siblings. The final page of the book echoes the cover, this time with Baby Boy making wild beasts of his hands, who he names Colin and Scraps.

Sadie and Ratz has what I call the “Where the Wild Things Are Factor.” Selling books for almost two decades, I have encountered a notable number of parents or grandparents who deem Sendak’s classic “too scary,” “too dark,” or full of bad behavior that children will mimic. Another favorite sibling story of mine, Kevin Henkes’ brilliant picture book Julius, the Baby of the World, also frequently gets this treatment. I have no doubt there will be many parents out there who will not want to expose their children to literary counterparts behaving badly. However, in doing so they are also depriving their children of what I think is one of the greatest things about literature — the chance to live someone else’s life and learn from their experiences. While most children’s books that promote life lessons are didactic, heavy-handed and devoid of character development, Sadie and Ratz is rich with characters who have interior lives. The lessons learned in Sadie and Ratz are subtle,  but they are also complex and ripe for discussion between parents and readers. Sibling rivalry, intense feelings and fierce behavior are a fact of life when kids are this age. Hartnett takes these realities and weaves them into an imaginative, engrossing story that will give emerging readers a sense of accomplishment and connection and provide parents with a pathway to discussing a sometimes difficult topic.

Tanya Z. Turek of books4yourkids.com has been a book review blogger of four years, a children’s bookseller for seventeen and mom for even longer.