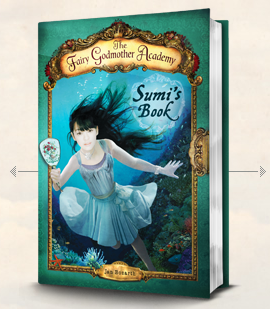 Jan Bozarth’s Fairy Godmother Academy began as an eight book series for Random House, but quickly expanded into multiple formats, including live events, music, and even its own dance movement. Here she explains her philosophy of creation, or rather, re-creation. I am a transmedia artist. In my work and in my life I speak many languages, including those of the dancer, writer, singer, flyer, songwriter, kick-boxer, cook, poet, naturalist, rock hound and musical theater buff. I am all of these things at once and that’s just my waking life. My dream life is even more expansive thanks to being a lucid dreamer since childhood. At twelve I could design a fantasy while awake, enter the world of my creation in a dream and control its characters and their destinies. I found I could also affect my own destiny so I learned to use dreams as medicine to refine my “real” world. I suspected that there were other girls like me. This is where I began when I started to write books for girls after twenty years of designing, producing, and writing video, games and music with companies like Mattel, Viacom, Simon and Shuster Interactive, and Girl Games.

It was not a business decision to call the Fairy Godmother Academy “a Transmedia project.” It was more the fact that in my mind it had to be transmedia because the story could not be told or experienced in a single form. I pitched it that way to Random House in 2008 and turned my idea into an eight-book deal. My background as a media and music producer gave them a reason to believe that I could execute in a variety of forms simultaneously. In the year and half that it took my editor to chop up the one manuscript I submitted into four books, the market changed to further support my theories about transmedia. It was a time of reinvention in publishing filled with opportunity like e-books and fan bases managed on social media. Games took their place as a major storytelling form and even apparel could talk. I knew that all the pieces of my creation could work together just like they do in real life.

But What do Girls Want? My primary market is made up of girls 7-12 with a secondary of women of all ages. Though my preteen girl market doesn’t really care about the technology in of itself, they voraciously use it because it helps them communicate with their friends and see more of the world…faster. They’ll read a story or see a movie but what they really want to know is how can they be like “her,” the heroine. My plan was to not only give them media but also give them real-time activities that they could do off line where they live at school and at home. The ultimate goal of any media property is to try be everywhere they are, give them “experiences” that lead to adopting your products, and a chance to become a part of an entire lifestyle. For the Fairy Godmother Academy girls/women I also wanted the stories to resonate, tap in, know, inspire, listen, and be good for girls and their communities. I knew from my experiences with Mattel that the fans wanted to look good while they aspired to something like writing their own stories and becoming a rock star or themselves. After all, I’m a girl too. I know what girls want. We all agree that we are not our iPods, iPads, Dr. Drea’s, or Thom’s. They are US. We live in the real world, but it’s got to be a world of our making and those tools help. And finally, for those who want to defend themselves without the help of the Prince, my story had to have a weapon that has beauty and power and is wielded by the girl, hence the Kalis Stick.

The Story Lives Where They Live

The mindful development of the various pieces of this property (stories, games, art style, fashion, music) took four years. Writing this manifesto of “girlness” took a lifetime. My goal for The Fairy Godmother Academy was to deliver a multi dimensional story, in multiple forms, to a multi-tasking audience, who really just wants to write their own movie and star in it.

I am excited about the future for the creators and dreamers of the world. As a Transmedia artist I understand that pieces of my stories will be sewn together by threads of silicon, sound, paper, memory and space. I can’t really own them once they are assimilated into a culture that consumes ideas only to transform, transmute and re-create. My biggest audience may or may not be born yet but my hope is that they will someday dance, sing and write some version of my story and send it back to me in another form that hasn’t even been invented yet. What lives on is the re-creation.

DISCUSS: Are Transmedia Stories Better Suited to Kids than Adults?