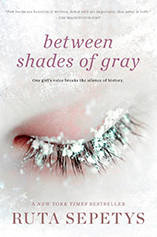 War is personal, the saying goes. It’s the buckle and moil where the house used to be. It’s the shadow where once there was a friend. It’s the brother gone missing and the mother at risk. It is depravity, despotism, lies. If our only hope against future war resides in the young we raise and teach, then war novels written for teens occupy an extraordinarily important place in the young adult canon. They have — one might say, or I will say — a responsibility. To tell the truth. To broker a truce. To declare, “This is courage or decency or love in a world that can barely be explained.”

But setting a fiction down within the countless corrugations of an actual, historical war is tricky stuff. Somehow or other, the rules must be made clear. Who is good and who is bad, and why? How did so much ugly stuff erupt from people not that different from you or me? What, exactly, are all those shades of gray? Clarity matters — of course it does. But if the facts are made to matter most—and often, it seems, facts are made to matter most—opportunities are lost. The books may teach, but will they inspire? Will teens choose to pass them on?

Perhaps no recent book underscores this point more magnificently than Thanhha Lai’s Inside Out & Back Again, the winner of the 2011 National Book Award, among other honors. This is the story of a young girl’s flight from Saigon to Alabama at the height of the Vietnam War. It is a book that renders war precisely the way a 10-year-old might see it—explosive and incomprehensible, not explained, but felt, images received as fragments. We don’t need the textbook facts to be transported. We are right there:

We pretend
the monsoon
has come early.

Distant
Yet within ears,
Within eyes.

Not that far away
After all.

Of course, one doesn’t need to write a book of prose poems to produce a profoundly beautiful, deeply affecting war novel. Markus Zusak’s The Book Thief has captivated readers since its publication in 2005 not only because it depicts the impact of the Nazis on a small German town, but because Zusak has made Death itself his storyteller, and because, in Death’s own words, the story is mostly about this:

We may not be able to name every member of Hitler’s inner cabinet by the time we (sadly) close this book. We haven’t been force fed, textbook-style, the day’s headlines. But we know what it feels like to live within turmoil, and to lose people we love. We know what bravery is and why it matters. We know what genius is, in books. We need atmosphere in war novels, not just the facts. We need those moments that, for example, Susan Campbell Bartoletti provides in her own Nazi Germany story, The Boy Who Dared. We learn an awful lot from this book—about the evils of blind patriotism, about the cost of resistance, about an actual boy, Helmuth Hubener, who tried to change his world. But it’s the small details that make the story resonate, sentences like these: “It’s April 1935, and spring has come to Hamburg. Helmuth hears it in the crackling gray ice floes that drift through the rivers and narrow canals.  He sees it in the mallard ducks that bob, bottoms up, in the Alster lake and in the return of the robin.”

Trent Reedy, with Words in the Dust, a first novel that takes us into the heart of Afghanistan, also favors the domestic detail over the broad sweep of facts. His narrator, Zulaikha, lives modestly in the city of An Daral with her beautiful sister, her father and his second wife, brothers, and a deformity that causes her to cover her face and to lose hope in her own future. Here it isn’t the war we see, but the people behind the headlines—their everyday hopes and tragedies, and the Americans who intervene.

War novels — perhaps more than any other kind of novel — depend on a pause in the plot. A quiet prayer. An aside. A perfectly articulated detail. A moment of transcendent meaning. Consider Lois Lowry’s Nazi-era classic Number the Stars. Here our heroine is a girl and the setting is Denmark, a country the Nazis occupied for five years. We learn, through this novel, about the extraordinary efforts of Danes to smuggle some 7,000 Jews to safety in Sweden. But the brilliance of the book lies in moments like this one, when Annemarie tries to understand the inexplicable: “Ellen had said that her mother was frightened of the ocean, that it was too cold and too big. The sky was, too, thought Annemarie. The whole world was: too cold, too big. And too cruel.” Not long ago I met with 40 girls in a Catholic school to talk about reading and book love. I had carried Ruta Sepetys’s international bestseller and already-classic novel Between Shades of Gray with me, hoping to entice these young readers toward this heartbreaking tale of the 1941 Soviet invasion of Lithuania. Turns out, I hadn’t needed to burden my bag; the girls had already found this book on their own. I wanted to know what they loved about the book. Their hands flew high.

“It was the book’s first words,” one young lady said, repeating them now, from memory: ‘They took me in my nightgown.'”

Beth Kephart’s fourteenth book, Small Damages, is set in a cortijo in southern Spain and recalls the Spanish Civil War. It has received two starred reviews and will be released from Philomel in July. She blogs about books and life at http://beth-kephart.blogspot.com/.

DISCUSS: When Do YA Novels Go Too Far, If Ever?