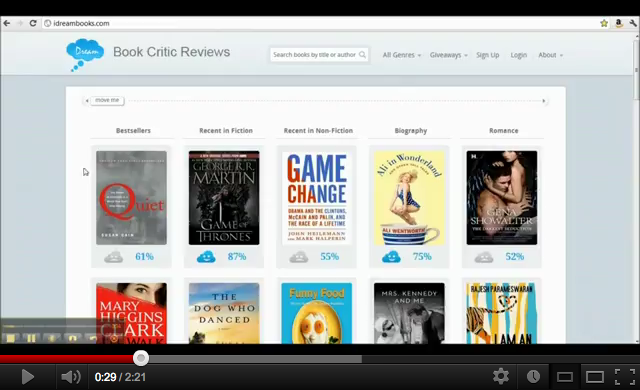 The Internet has revolutionized book reviewing and the world is now awash in opinions about books. Sites such as Bookslut, Goodreads, The Millions, Books Inq publish news and reviews on a daily or even hourly basis and that is but the tip of the virtual iceberg. And yet, says, 27-year-old Canadian entrepreneur Rahul Simha, there is a gap that he intends to fill with his site iDreambooks.com.

“I’m a big fan of Rotten Tomatoes, and I use it all the time when I’m deciding on what movie I’m going to watch — how I’m going to invest my time. I was looking for a similar review aggregator for books forever, waiting for someone to come along and do it, but nobody did. So I decided to do it myself.”

iDreambooks.com promises to collate reviews from “reputable sources,” thus helping readers make the correct purchasing decisions. Just as Rotten Tomatoes has its fresh/rotten rating, so iDreambooks has its equivalent, a “must read” which occurs when a book scores at least 70% positive reviews on the Readometer. Simha defines “reputable sources” as “All the major papers and magazines — The New York Times, Washington Post and so on. We accept new magazines also, but they need to have been around for at least one year. On our site we have the criteria we use to define professional critics.”

If an emphasis on the ever dwindling book review pages of “dead tree media” seems too narrow, then Simha points out that iDreambooks.com also uses reviews from online reviewers, and indeed freelancers and bloggers who want to participate can apply to be featured via the site’s contact page. Here, too, however criteria apply, “They must have been around for a long time, they should only blog about books and they need to meet our standards of quality.”

iDreambooks has developed rapidly. Simha has been “playing around with the idea” since February, and developing it seriously since the end of March. There are three founders and four contractors on staff; Simha and one of his co-founders are engineers by training, but know how to write code. Currently they are adding new content to the site every day to make it as comprehensive as possible. Of course, others have announced similar intentions over the years, including Kirkus Reviews, which abandoned the project. So how does it differ from other review aggregators such as Bookmarks Magazine, Books & Media and The Complete Review?

“Well, I think our user interface is superior. It’s much easier to discover books on iDream. Really it’s made for discovery: there’s an emphasis on covers and images. The site is like looking in a shop window. Then, if you like a specific genre, it’s easy to get to it in one click from the menu bar. Overall, I’d say our UI is more intuitive. Ultimately meanwhile our goal is to get a lot more books in the database. The Complete Review has been around for a little while, and while right now its database may be bigger than ours, it’s not as big as it could be when you consider the length of time it’s been around.”

The discovery-friendly design is something Simha stresses, comparing it favorably to both Goodreads and Amazon. “They’re built for search, not discovery. Goodreads has the black box where they might recommend a book based on your taste, but on our site you stare directly at the books. It gives you a bird’s eye view of what’s out there, and you don’t get that on other sites,”

Currently iDreambooks emphasis is on books from the Big Six (which traditionally get the bulk of review attention from traditional media), though in the future “we may move into covering smaller publishers.” Feedback has been positive, and several publishers have expressed interest in syndicating the aggregated ratings, though presumably Pantheon would skip mentioning that Alain de Botton’s Religion for Atheists, reviewed by a mighty 54 different venues, only scored 34% on the Readometer. Random House, publishers of the current mega bestseller Fifty Shades of Grey probably aren’t so worried, even though it scores a miserable 30%.

Indeed, says Simha, when the aggregated scores first started rolling in, he was quite surprised. “If you look at the site and click on the ‘bestsellers’ you’ll see that some of them have really low scores. The critics hate them.”

SURVEY: How Many Books Do You Buy Because of Reviews?