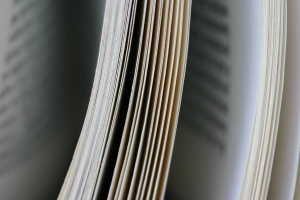 As we’ve become more comfortable with e-books, have the ethics of book scanning changed? Not too long ago Google inspired rage in publishers when they announced their intention to scan and digitize all the world’s libraries — largely without permission. The very thought still bothers many publishers, though it is likely that some of the ire has subsided as people have become more accustomed to digital publishing and e-books in general. Though, apparently, somewhere at Google headquarters there is a wall featuring the destroyed covers and spines of many of those books that have made their way into the Google database — and isn’t it curious that there isn’t a photo of this floating around somewhere on the web (if you have one, please send it to us)? Is there fear that it might provoke a backlash in the same way the Bush administration feared allowing journalists to photograph the coffins of soldiers who died in overseas wars?

Not too long ago, adjunct professors would surreptitiously copy chapters and essays out of books and distribute them for use in their classes. These unofficial “course packs” were often criticized as copyright infringement — but unless you were an adjunct professor of copyright law, it was hard to know if your behavior fell under “Fair Use” or was simply abuse. Now, so much of that material is readily available for free online, that it makes the very idea of a course pack a likely afterthought for many.

Not too long ago, the idea of scanning a book and turning it into a e-book for your personal use was exotic. Now, it has been commercialized. A popular practice in Japan and Russia, it is now coming to the US.

Jessamyn West, a vocal e-book and digital libraries advocate, has called the conversion of a print book into a digital one, “the transubstantiation of the printed word,” lending the practice religious overtones. Others may see it as simple copyright infringement.

Of course, that depends on your point of view.

Hiroshi Nakano, CEO of of zLibro, Inc., which operates the 1dollarscan service (discussed in today’s feature story), told The Economist earlier this year that “he and his legal advisers believe that portions of [Fair Use] doctrine (related to so-called fair use and first sale) protect the firm’s activities,” largely because they don’t make a master copy of a file and they destroy the individual copy of the book after it it scanned. Yet, the magazine noted, protection under Fair Use remains far from assured. Under Fair Use individuals have the right to copy music they own for personal use (though the jury is still out on whether this extends to ripping digital files). But that pertains only to music, not to any other media. First-sale doctrine, meanwhile, lets one sell, loan, donate or even destroy a book without permission from the copyright holder. Transforming it, however, is another matter altogether.”

Legalities aside, is it ethical? If an author refuses to allow their publisher to put out a digital edition — perhaps for artistic or personal reasons — is it nevertheless okay for a user to convert the book to a digital format for their own personal use? There may be nothing stopping them, but is it right? And, as a result of our relatively new comfort with digital books, have the ethics changed?