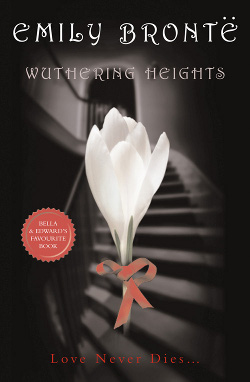 “In the end, we want teen readers to read good books. We want them, as well, to trust books.”

A recent  New York Times article examined the trend among some publishers to repackage classic books like Emma and Jane Eyre with provocatively modern jackets designed to grab the attention of teenager readers devoted to Twilight‘s Edward and Bella, or The Hunger Games’ Katniss and Peeta. One cover features a stubble-faced Romeo clad in a tight white tank-top; another proclaims Wuthering Heights is “Bella & Edward’s favorite book.” At a Barnes & Noble in New York City, four new editions of novels by Jane Austen and the Bronte sisters were displayed alongside best-selling contemporary paranormal romances. (The more traditional versions of Austen and Bronte were still available for sale in the adult-fiction section.) The question: is this necessarily a good thing?

Does pimping out Emma or Jane Eyre by dressing them up in contemporary attitudes and putting them out on the street to lure in new audiences diminish the stature of the books being sold? Does marketing them as if they were contemporary teen versions of paranormal or dystopian novels make it seem to teen readers as if the reading experiences are somehow equivalent? And even more importantly, do the covers misrepresent the books to teens, and if so, what might the reaction be? Will readers take the covers too literally and then be disappointed when the book doesn’t live up to its promise?

Sarah Gerard, who manages the children’s section at McNally Jackson Books, told The Atlantic Wire that she doesn’t think that kids judge a book by its cover. “My experience with jazzed-up covers, with teens at least, is that that make no difference at all…If they don’t want to read Pride and Prejudice, they won’t read it, regardless of what the cover looks like.”  But at least one noted YA novelist has her own experience with cover art that raised concerns on the matter: Beth Kephart read the Times article with great interest. Her reasons were purely personal — her husband had recently finished illustrating and designing the cover for her historical YA novel that’s due out next year, and she was intrigued by the words chosen to describe the new aesthetics: “provocative,” “modern,” “bold,” “cutting edge.” What, she wondered, qualifies a cover as being cutting-edge? Isn’t “cutting edge” applied to things that have never been done before, or at the very least, haven’t been done for long?

“[It’s applied] to new looks I mean, and not to deliberately borrowed ones,” Kephart explained. “So I thought about that. And I also thought back to some of the comments that surrounded the release of my third YA novel, Nothing but Ghosts, a work of contemporary realism with hardly a trace of  supernatural or winged things (excepting the birds). ‘Where are the ghosts?’ some teen readers complained. ‘False advertising!’ others declared. ‘I want my money back,’ said one. I had used the word ghosts to represent loss; this was a book about women who had gone missing. A handful of my teen readers, however, expected more conventional ghost fare. I learned a lesson from that, for, however unwittingly, I had misled readers looking for a very particular book.”

“In the end, we want teen readers to read good books. We want them, as well, to trust books. I think many of the new covers are lovely and appealing, and I think the goal of these publishing houses is commendable. I will hope, with them, that this strategy works. That teens are led toward the classics — and that they fall in love.”

The question, of course, is if they fall in love with what the cover promises but perhaps fails to deliver — is it like falling in love with someone on a dating site and then, when finally meeting them in person, realizing that they’re not the person you thought they were going to be?  Can that disappointment be overcome by the reality of the reading experience?