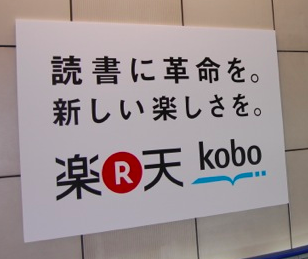 TOKYO: The keynote panel discussion at Tokyo’s E-Book Expo, as part of the Tokyo Book Fair last week, wasn’t expected to get the pulses racing despite the presence of Mikitani-san, whose company Rakuten has acquired Kobo, and Noma-san, the leader of the giant publisher Kodansha. We feared that the dot-com arriviste and the bastion of traditional Japanese publishing would do little more than exchange platitudes. Such an exchange would signal that the publishing establishment had pigeon holed Kobo alongside the much reviled Amazon and that the prospect for the whole industry getting out its digital limbo was slim. At the local train station, the poster reads: "A reading revolution. Whole new ways to enjoy books. (From) Rakuten Kobo"

That’s what we expected. Instead, we got a Rakuten Kodansha love-in, which heralds a sea change in Japanese publishing.

Before the panelists even had a chance to shuffle their pencils and open their bottles of mineral water, a delighted Noma-san held up a t-shirt, apparently just received as a present from Mikitani-san. Printed on the urban camouflage design were the words datou amazon (Destroy Amazon!). Jaws dropped. Any interloping Amazon executives could be excused for texting home, “Seattle, we have a problem”. This party was on.

What followed in the next hour could form the basis for a case study in how to disrupt a slow moving industry steeped in tradition. Aspiring MBAs should note three points in particular.

Firstly, an important branding exercise has taken place. Rakuten Kobo has been deftly presented as a completely domestic business, a Japanese operation sensitive to the needs of Japanese consumers and business partners alike. The accepted term is no longer “Kobo Rakuten”, as appears on the logo, but instead “Rakuten Kobo.” The emphasis is on Rakuten and the word Kobo is never used alone unless in reference to reader hardware. Extreme pedants will even have noted that some advertising hoardings at the local station show the name as Rakuten Kobo and not the other way around. A typo? No. Mikitani-san Mikitani-san is featured on one of the most prominent promotional displays at the Kodansha stand.

Secondly, Mikitani-san pushed every single hot button that is shared by Amazon-wary publishing executives around the globe. He wants physical bookstores to thrive, reading to be promoted and for there to be a level playing field regarding sales tax. And no, he does not want to be a publisher. He also stated his ambition for there to be over a million Japanese books digitized. Similar numbers have been stated by industry associations such as the Shuppan Digital Kikou (SDK). When espoused by the likes of the SDK, the number one million is just big talk, a ridiculous number. From Mikitani-san, though, it sounds like a plausible target.

Finally, if you want to do something as ambitious as disrupting an entire industry, lead from the top. In Japan, there are two celebrity business leaders. Masayoshi Son of Softbank and Hiroshi Mikitani himself. Both are enormously successful and both are revered. Mikitani-san is the face of Rakuten Kobo and is comfortably the peer of even the most senior figures in the largest of publishers. He is someone with whom the Japanese publishers can do business. Other companies that have failed in the Japanese e-book market over the last 10 years may make excuses about not having a leader with the Mikitani Touch but to do so would be to miss an important lesson. They may not have celebrity bosses but by fielding mid-level product managers as the face of their ebook ambitions they signaled a lack of commitment to nervous publishers and they all but guaranteed that their sales pitches would not even reach the buying public. Kodansha and Kobo were even placed in close proximity at the Fair.

Amazon, who have stated that the Kindle is “coming soon” to Japan, are still a formidable opponent and we most certainly will not be seeing a rerun of the eBay trouncing which saw the US auction site run out of town by a Rakuten peer, Yahoo! Japan. Amazon is extremely popular with local consumers and, within the publishing industry, most accept that Amazon sells more books in Japan than anyone else. That said, Amazon has an enormous fight on its hands if it wants the Kindle to be the market leader here. Rakuten Kobo have launched before the Kindle, will secure the best tie-ups with physical bookstore chains and the publishers will be going out of their way to support this local favorite.

As Wednesday’s panel discussion wrapped up, Noma-san made a point of promoting Mikitani-san’s new book about the importance of English for businesses with global ambitions. “Is it available as an e-book?” asked Mikitani-san and Noma-san confirmed that it would be. One book out a million to be digitized. But a very symbolic one.

Robin Birtle is the founder of Sakkam Press, a publisher based in Tokyo and London. Robin can be contacted at robin[dot]birtle[at]sakkampress[dot]com.

DISCUSS: It’s Amazon vs. The World, Can Amazon Win?