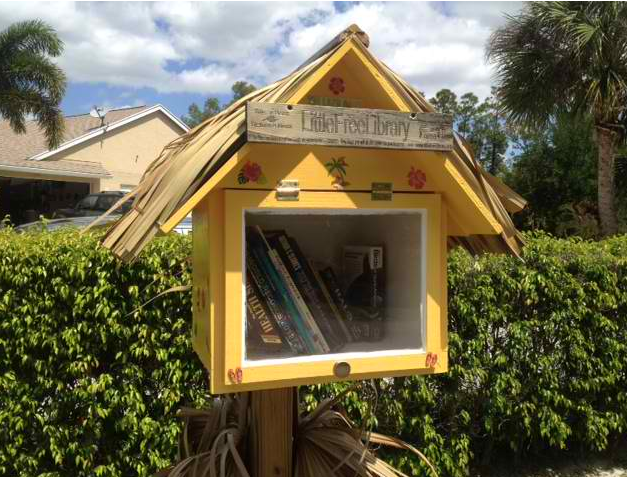 “In a way, each of these libraries are an everyday miracle. Somehow, they just keep going.”

In 2009, the first Little Free Library was erected in Hudson, WI by Todd Bol, who wanted to find a creative way to memorialize his mother, a book lover. Resembling a large birdhouse, it was a 2’ x 2’ box perched atop a pole, and weatherproofed. A sign hanging above a plexiglass door said simply: “Take a book, return a book.” This honor system mentality may bring to mind the loss of Andy Griffith and his Main Street way of life, but in fact the Little Free Library, a non-profit organization created to facilitate literacy and community, is very much alive, a grassroots movement working to upend the hyper-techno ways we socialize on social media, or eschew library visits in favor of downloading e-books. It’s a way to elevate the love of pulp and bindings once again, and to be privy to what friends and neighbors have their noses in (would I have a dollar for every time I’ve wished for X-ray vision to read Kindle or Nook titles hidden from view on subway commutes, though 90% of them are probably 50 Shades of Something or Other).

Tod Bol and his co-founder Rick Brooks had no idea that several years later their organization would sweep America. A few Little Free Libraries have even been spotted in Canada, each as promising as a rare Painted Bunting sighting.

Placing free books in public places is a way to reshape some semblance of community sans texting, Nooking, and spending money, but it’s also a way to bring books to disenfranchised communities. One massive volunteer effort just placed 45 libraries in Milwaukee. “In a way, each of these libraries is an everyday miracle. Somehow, they just keep going,” says Brooks.

Despite their success, there is a wandering concern about the libraries taking root without the umbrella of the Little Free Library organization. It seems likely that some people will get the idea and stick one in the ground without linking into the official community. How hard is it to erect a bird house-like structure up in your front yard and fill it with books and call it a library? What do Little Free Library stewards have to gain by officially tying into the organization, which comes at the price of $29.95, minimum, for a starter kit?

Eliza Williamson, who lives in a suburb outside of Boston, just purchased one in June as a 40th birthday gift to her wife Heather, a librarian at Tufts University, “I did register ours through their site, mostly because once you do, you’re put on their Little Library map, which is cool. Now we’re linked to the greater community of Little Libraries, which will be useful, I imagine, in keeping the idea fresh when the initial novelty wears off.” The benefits will reach beyond that, if Brooks and Bol have their way. They’ve been working on different ways to grow a more cohesive book community (theme weeks? an aggregate blog?), and relationships are in bloom with several indie publishers (Coffee House Press, Milkweed, and Graywolf). Chris Fischbach, publisher of Coffee House Press, also a non-profit, has already donated several thousand books to Little Free Library in exchange for library structures that they can either use, or sell at silent auction. “I like to give books to them because I think it’s cool. We’re trying to act as a catalyst for books for further art making and community change, rather than just selling them.” Fischbach sees other long-term benefits to the partnership as well. “I love the idea of our books being used by another organization that we admire and want to be associated with. We have stock in warehouse and want to get it into the hands of people who appreciate them. If you’re going to buy a Little Free Library, then chances are you’re already a community literary supportive person, and it’s a way to get our books into those hands.”

Communities stand to benefit on many levels. For people who feel isolated, including many in the elderly population, visiting a Little Free Library can be a gentle way to engage again with others. Younger readers can also forge new friendships. Nicole Okumu, who recently moved with her family from Copenhagen to Morristown, NJ, has her eyes set on building one in her new front yard. “My family and I moved from a very communal place, and so I’m trying to recreate that community as much as I can.” Her starter kit is on order, and she and her two young sons are excited to see what it will lead to.

Small business like Indie Coffee in Madison, WI, have also found that having a library perched in the front of their shop helps regulars bond. JJ Kilmer, the owner, has recently installed her second Little Free Library (the first one, made by a local Amish man, was vandalized during a rowdy football weekend). “According to Rick [Brooks], ours is the busiest in the city. It might be totally packed first thing in the morning, and it’s empty by noon. When you can find a little treasure in a little house, and it’s free, that’s exciting.  People are so caught up in their busy lives, working harder than ever before, that the concept of being able to just sit down and read a book is really appealing,” says Kilmer.

With each box, a different personality resides, both in the contents of the library and in the décor. Bill Wrigly, an artist in Toronto, has created a limited edition of libraries, and the Absolutely Art gallery in Madison has even had an art show dedicated to the mini-library medium. Eliza and Heather from Boston chose to paint theirs with a dog theme. “I painted a picture of each of our dogs of the library sitting on a stack of books,” said Eliza. “On the back of the box there is a Jorge Luis Borges quote: ‘I have always imagined that Paradise will be a kind of library’.”

DISCUSS: Have E-books Led You to Purge or Preserve Your Personal Library?