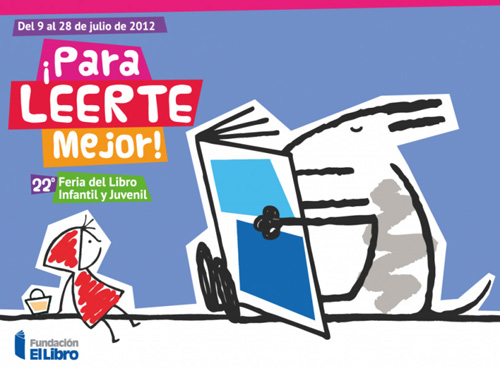 With over 130 exhibitors occupying two halls of the fair grounds, the 22nd Buenos Aires Children’s and YA Book Fair has recovered some of its past splendor. The organizers expect more than 300,000 visitors from July 9 to 28, overlapping with winter school vacation, despite the cold-snap that’s hitting the city.

Fundación el Libro (FEL) has improved the exhibition area, bringing back the Plazas (indoor squares dedicated to playful shows in which storytellers, musicians, clowns and puppeteers entertain the small folks during the visit). Exhibitors are encouraged to let the children touch and play with the books and “serious” institutions offer games, such as the Central Bank (the equivalent of the Federal Reserve) which will exchange play money for a book if the child learns how to use a toy ATM.

The Goethe Institute is exhibiting old and new editions of Grimms’ Fairy Tales, honoring the brothers Grimm on the 200th anniversary of its first publication. Another classic with a leading role this year is Charles Dickens. The civil association La Nube has dedicated its space at the fair to the 200th anniversary of his birth, and in the Foro de Ilustradoresartists and illustrators are exhibiting their works in honor of the British writer as well.

There was nothing digital in the professional conferences held July 16–17, although the director of the FEL, Gabriela Adamo, says that children and electronic books are a successful combination: “It’s impressive: they adapt much faster than an adults, and have no prejudices or preconceptions, they read where they are comfortable.” However, the offering of apps and e-books for children at the fair is not so impressive.