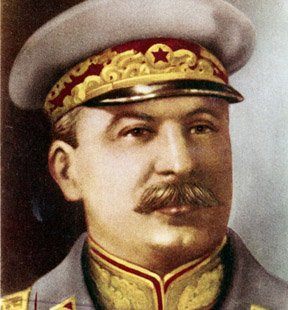 The idea that visitors in a public library might be able to pore over Stalin’s personal marginalia was unimaginable two decades ago.

Over the last two years Yale University Press and the Russian State Archive for Social and Political History have been quietly digitizing Stalin’s personal archive, consisting of thousands of documents, letters, and books, that passed through the Soviet leader’s hands. Vadim Staklo, the editor overseeing the project appeared earlier this month on the BEA panel “Stepping into the Digital Future with Russia” to talk about this and other initiatives. Regular Publishing Perspectives contributor Daniel Kalder caught up with him to discuss some of the intriguing “Secrets from the Russian Archive.” Vadim Staklo graduated from Moscow State University with a degree in the History of Latin America in 1988. After working in the USSR, he traveled to the University of Pittsburgh in 1993, where he first earned a Masters and then PhD in Latin American and Soviet history. Since 1997 he has worked for Yale University Press, and is currently editor for a broad list of titles, ranging from books on Johnson, Boswell and Benjamin Franklin to projects on Russian, Soviet and Eastern European history, from the Annals of Communism series to Eurasia Past and Present and beyond.

“The digitization of the Stalin archive project is not something standalone, not just a bunch of documents being scanned in,” says Staklo. “It grew out of a research and publishing program, and has its roots in the Annals of Communism series which Yale started in the early ’90s, more or less as soon as the USSR collapsed and scholars suddenly had the opportunity to see documents in the Communist Party archives. The founder of the series Jonathan Brent travelled to Russia, George Soros provided some seed money, and very soon the project to discover, annotate, and publish some important historical records was up and running.”

The first fruit of this chaotic period of openness in Russian history was the 1995 study The Secret World of American Communism, which was a huge success. Says Staklo: “It made public previously unknown documents from the Communist Party archive, showing in particular how the US Communist Party was heavily subsidized by the Soviet Union and that it maintained an espionage apparatus with direct ties to the Soviet intelligence. The book was an important revelation; it sold many copies and generated a huge response and heated discussions among scholars and in the media.” Letter from Stalin thanking Hitler for signing the non-aggression pact

Twenty-four more books have followed since, including Arch Getty’s influential The Road to Terror, Matthew Lenoe’s The Kirov Murder and Anne Applebaum’s Gulag Voices. Staklo describes the format as “documentary monographs” — translated source materials appear in their original form, but accompanied by an author narrative setting context. Perhaps the most unusual of all these monographs is the collection of doodles by Bolshevik leaders Piggy Foxy and the Sword of Revolution.

“The popular perception of Soviet leaders mainly comes from the movies- you know, sclerotic stodgy men with thick eyebrows and golden stars on the lapel,” says Staklo. “In real life however many early Bolshevik leaders were very active, lively unorthodox people from very different walks of life. Some were refined intellectuals, others came from humbler origins, some were good writers… and some knew how to draw. These are the images people drew in the margins during the long hours of party meetings. There are caricatures, and also satirical depictions of current events and issues. They went unseen for decades as most of the artists fell victim to repression. They’re not just pictures however- they tell a story about early soviet politics and personal relations on the Bolshevik Olympus, and the problems they had to deal with on the daily basis.”

Meanwhile the idea of finding scholarly treasure in the margins of old soviet documents would take a new twist in the early 2000s as much of Stalin’s personal archive was being opened to scholars.

“At that time the Stalin materials hidden in the presidential archive started the declassification process, and they were moved to the public archive. Yale had already been cooperating with the archive and Russian scholars on other projects, and it did not take long for the idea to jointly digitize and publish the collection to develop.”

Yale secured a grant from the Mellon foundation to digitize the documents and create a hosting platform complete with advanced search and collaboration tools. The project has been going on for several years, but now says Staklo, the scanning is almost complete: “Last November we launched the beta version of the archive, and in summer we hope to have an official public launch.” Even so, not everything in the Stalin archive has been digitized. However this is not down to reasons of secrecy but rather questions of sheer practicality:

“There are close to 40,000 items in Stalin’s archive. Many of them are not documents but objects — gifts to Stalin. Then there are lots of telegrams of condolence on his death, and also telegrams of congratulation on his 70th birthday. We haven’t scanned those. However we have scanned all the documents that he wrote, read, or touched, including those that he annotated or initialed: basically, everything that went through his secretariat. We are also scanning all the books in his library in which he wrote margin notes, which is between 300 and 400 titles. The total number of documents to be digitized is about 28,000, or over 400,000 pages. The archive also has all the maps that were used by Stalin, but we’re not scanning those right now- maps require special equipment and procedures.”

So what kind of comments did Stalin mark in the books he read? A wide range, says Staklo. While annotating a book by his ideological nemesis Karl Kautsky the dictator might explode with rage and scrawl “A traitor!” next to a particularly objectionable section, but Stalin also made copious and detailed notes and insightful comments, revealing a firm grip of Marxist theory:

“The common perception is that Stalin was brutal, paranoiac and senseless. But if you read the notes he was making you can see that, yes he may have been brutal and paranoiac- but he was not stupid. For example, he was very keen on the arts as the most important vehicle for propaganda and he read every important play or screenplay offered by a theater or screenwriter. He read them carefully, and wrote long letters to the authors or producers with his comments. He also personally supervised and heavily revised the Short Course In The History of the Communist Party of the Soviet Union. This was one of the most important books in the USSR, and you can see that it went through many drafts and that Stalin essentially rewrote the entire volume completely.”

Perhaps surprisingly-given his stupendous personality cult — Stalin frequently cut out laudatory comments referring to him, preferring instead to emphasize his role as a pure agent of history — an attitude much more in line with Marxist theory. Not only that, “He had a very clear understanding of what he wanted. He simplified the text for the not so sophisticated readers — he was a great populariser. Next year Yale will publish a facsimile text of the Short Course, edited by David Brandenberger, showing the original text and the one with his comments, explaining exactly what he changed and why. This will be followed by a similar edition of Stalin’s Biography.”

Of course, a document without context is of limited use, and as with the Annals of Communism series, prominent scholars of USSR history have been invited to participate in the digital project.

“To make sense out of this eclectic collection of documents, some major subjects will be curated by specialists in that particular field — for instance, Arch Getty will help us organize the materials on the terror. Lynne Viola will do the same for peasantry and collectivization, Tim Naftali — on the beginning of the Cold War, etc. They will identify the most significant documents pertaining to the subject, tag them and write an introduction and annotations, and mark the most important ones for transcription and translation. Once it is done, non-specialist users can easily browse the relevant materials, learn more about a particular subject, and even create course packs for teaching. Transcribed and translated documents will allow users to perform full-text searches whereas right now the archive can only be searched by metadata.”

“So far a dozen prominent experts have committed to research these thematic modules,” says Staklo, “So that in future non-specialists will be able to browse and read the archive. We want to create something educated, ordinary people can use without special preparation in archival work. The plan is to offer it by subscription, not only to research institutions and libraries but possibly also to schools and individual subscribers”.

Perhaps it’s difficult to grasp the scale of what Yale is about to put online. The idea that casual visitors in a public library in Utah might soon be able to pore over Stalin’s personal marginalia via their computer screens would have been absolutely unimaginable two decades ago. Indeed, says Staklo, the sudden mass of information available to scholars has completely revolutionized the world of soviet studies, and the ramifications are still being digested:

“In the past so little information was available that every single released document was scrutinized intensely; the problem now is different — today there are many thousands of documents being published or made available in different forms and formats, and what are scholars to do with this mass? A new kind of information technology might offer an answer — we now have tools to slice and dice the data, so the research can be extensive as well as intensive. We are just beginning to grasp the challenges and learning from experience of how to deal with such a huge amount of information in the humanities. It’s a different paradigm.”

DISCUSS: By Digitizing Archives, Can Libraries Literally Save History?