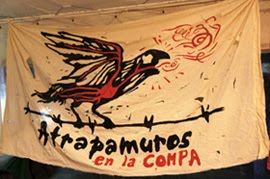 Me Muero Muerta [I Die Dying Editions] may be the first prison publishing house in the world.

They don’t write crime fiction, but true crime and social marginality have indelibly marked their lives. They live on the other side, where crime is supposed to have been conquered and punished. They are the women writers in Area 31, at the big prison complex of Ezeiza, on the outskirts of Buenos Aires.

Ediciones Me Muero Muerta [I Die Dying Editions] is the first publishing house to operate from inside the Argentine prison system. It was born in December 2011, and is the result of the combined efforts of the inmates and the NGO Yo No Fui [It wasn’t me]. They publish artisanal books that are works of art in themselves, filled with poetry and short-stories — written by the women that are serving sentences.

Liliana Cabrera, poet, long-term convict and former prison librarian, is the editorial director of Me Muero Muerta. “I discovered my calling in jail,” she says. While working at the Ezeiza library, she observed that the books her fellow inmates wanted most were self-help titles and purple romances. These preferences came both from the desire for advancement and the need for sex. As Ruth Cortés wrote in the magazine ELBA [Spanish acronym for “A Walk on the Edge”], also edited in the prison, “Sex is imperative to me. It’s important. It’s necessary. Unfortunately, here, in this place, we don’t have it, and many times we must draw upon many things because we are repressed in this natural need. The penitentiary mindset is built on bigotry.” Cabrera thought that other means of advancement and fulfilment could be offered to these women who, in many cases, live with their infants in the prison. She wrote to the Federal Authorities, asking for permission to develop a book club that would allow the convicts to get in touch with higher forms of writing and, more importantly, to share their reading experiences, enriching their understanding of themselves by comparing their attitudes toward the written word. What started as a three-month workshop in October 2008 became a continuous and popular activity that has resulted in a publishing house, a magazine and a website, Atrapamuros [Wall-catcher].

Luis Sanjurjo, a musician and university professor in his early 30s, leads the reading groups, where participants read everything from popular crime fiction to short stories by Jorge Luis Borges. María Silvina, one of the inmates, expresses frustration upon reading one of Borges’s most intellectual essay-stories, “The Analytical Language of John Wilkins,” in which the protagonist is taxonomy. “I dislike Borges,” she says. “He didn’t do anything in life but be a writer,” she adds, much to the surprise of another inmate, a Uruguayan fan of the Argentine author, who retorts: “And do you think that’s not a sufficient exploit?” Silvina says she more contemporary, down-to-earth authors. “Life is not literature. Do you know why I am here? It was my choice,” she challenges. “The streets are much more dangerous than here,” concludes the woman who is now an author herself — of the story Cuando leas este cuento, ya estaré muerto [By the Time You Read This Story, I’ll Be Dead].

Area 31 was inaugurated in the mid-90s, when the female prison population started to increase simultaneously with the rise of petty drug dealing on the streets, mainly crack. After a year of book club experience, Sanjurjo thought that a magazine was the next step. ELBA was born by the end of 2009. He describes the magazine as a boxing ring, which each of them has to enter “in order to exercise — thinking, doubting and describing suffering and happiness in a poetic way.”

Liliana Cabrera, the librarian turned poet and editor-in-chief, has already published her two collections of poetry with Me Muero Muerta: Obligado Tic Tac [The Unavoidable Sound of Clockwork] and Bancame y punto [Put Up with Me, Period]. She also is the leading subject of the documentary Lunas cautivas [Captive Moons], directed by Marcia Paradiso, which follows the poetry workshops led by María Medrano inside the penitentiary.

Reel from Lunas Cautivas on Vimeo.