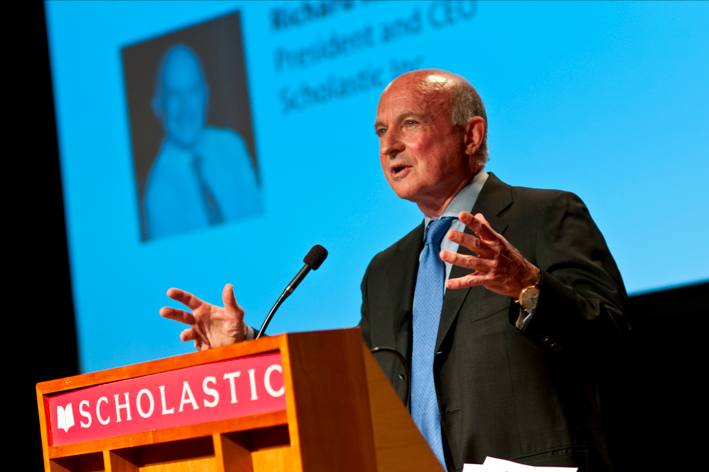 “Great is the sheer exhilaration of falling in love with a book.”

What makes a children’s book great? Publishing Perspectives, along with host Scholastic Inc., held its inaugural children’s publishing conference yesterday, May 31, in New York City, in attempt to answer that very question. And while the subject may not have been settled definitively, the sold-out crowd of 230 writers, agents, and publishing professionals were treated to a morning of illuminating discussion.

Edward Nawotka, Publishing Perspectives‘ Editor-in-Chief, defined “great” in his opening remarks simply as, “The sheer exhilaration of falling in love with a book.” Richard Robinson, President and CEO of Scholastic Inc., after tracing the growth of children’s publishing since the 1940s, elaborated on the different ways a book can be great in his keynote address.

A great book is…

After at least partially defining what makes a book great, four very different panels discussions were held, each made up of the people who go in to making that great book not only possible, but brought to the notice of readers.

Literary agents Ken Wright, Rosemary Stimola and Erica Rand Silverman spoke on the topic “Blockbusters, Best Sellers and Everything in Between: Agenting Children’s Books.” Stimola, whose successes include Suzanne Collins’ The Hunger Games, discounted the notion that it was advisable to shepherd a blockbuster, “Start with shepherding an author,” she said, “and hopefully a blockbuster will follow,” adding that “If you’re thinking about the next big thing you might be missing the next great thing.” Wright noted that for him, it all came down to passion. “If I find myself thinking about a list of editors I can’t wait to send a manuscript to, and if that list gets to five, I know I want to get involved.” Self-publishing was a major topic, with both Wright and Stimola arguing that too many authors are simply too impatient too see their work in print and are unwilling to wait for the process of sending their manuscripts to one editor and then another and then another to take its course.  Silverman, while acknowledging that self-publishing has drawbacks in terms of getting the book noticed, can be the right path for some people. “If they have a platform already, then maybe they don’t have to go the traditional route.”

But once that has been accepted – what about going digital? That was the topic up for discussion by Kevin O’Connor, Jacob Lewis, and Paula K. Allen in “Born Digital, Buy Digital: Sales, Publishing and Community Building for the New Generation.”  O’Connor, Director of Business and Publishers Relations, Barnes & Noble NOOK Kids, spoke of the increase in digital sales in children’s publishing all the way across the board, proudly noting that “In picture book sales we’re the only game in town.” Jacob Lewis, co-founder and CEO of Figment, an online community for teens and young adults to create, discover, and share new reading and writing, spoke passionately about on the ways in which traditional publishers are missing out when it comes to young readers and online reading communities. “Digital natives present opportunity, not digital publishing,” he said. “Online communities of readers, engaging with stories and authors can only be good things for publishers – our audience of 250,000 kids are a self-selecting audience of readers.”

It then fell to YA novelist Beth Kephart, graphic novelist Raina Telgemeier, and picture book authors and illustrators John Rocco and Peter Brown to talk about things from their perspective, namely “Building a Career, Connecting with Kids, and Standing out From the Crowd.” The discussion was largely focused on the author’s growing role in self-generating publicity, from websites and blogs to social media and school visits. Kephart and Telgemeier both spoke of the importance to them of reaching out to their audience on a personal level, with Telgemeier stating that if you “Put yourself out there and give them a little piece of you, then the rest will follow.” Rocco, on the other hand, made clear how uncomfortable he was with the entire subject. “We should be spending our time on making content,” he said, “not tweeting or blogging.”

And then finally – what does the future hold? Scholastic editor and author David Levithan, Pamela Paul, Children’s Book Editor of The New York Times, and Roger Sutton, Editor-in-Chief of The Horn Book, Inc., got out their crystal balls on the subject, “Trends vs. Tradition: The Present and Future of YA and Children’s Books.”  But if there’s one thing they could all agree on is that trying to guess the next big thing is a fool’s game. “Publish a great book,” said Levithan, “and the trend follows,” adding that trying to ride on the coattails of a previous success rarely ever works either. “You’re going to be the next Harry Potter? It never happens. There’s never been an ambulance chaser that outsold the original!” The question was raised as to why so many adult books are proudly reading YA books, with Pamela Paul noting that “YA is less interior, less psychological, and very plot and story driven.” Levithan underscored that the question of adult and YA is a publishing distinction and not a writing distinction. The ongoing debate about digital is expected to continue into the foreseeable future all agreed, but, Levithan added, “to think that technology will change narration is a mistake. They’re words written down, whether they’re ink or whatever the digital format is.”

It fell to Sutton, though, to ask the most zen-like question of the day: Bedtime books — how is it that success in a picture book means that it puts the kids to sleep?”

In his discussion, author and illustrator Peter Brown may have offered the most succinct answer to a very vexing question, “If I read a story and I relate to it, if it lingers in my imagination, then it’s a great book.” What every participant in the conference agreed on was that no matter the format, what matters is the book. First, last, and always.

(With reporting by Alex Mutter)

DISCUSS: Publishing Perspectives at BEA — Get in Touch