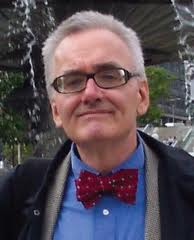 “If we had a national library of e-books, you wouldn’t need the library down the street,” Roger Sutton says.

The year after Roger Sutton graduated from college, he worked as a security guard for the Pomona Public Library in California. He made friends with a librarian there who set him on his path to librarianship. The library itself was neutral territory for two warring gangs. “That fascinated me,” recalls Sutton. “I’m interested in literature, how it’s read, how it’s received, and what its place is in the culture.” Roger Sutton: “I never thought I’d get to be a full-time book reviewer."

Sutton knew he wanted to be a librarian, but it was the legendary Zena Sutherland on the University of Chicago’s Graduate Library School, author and critic, who ignited his passion for children’s literature. “She was a very sharp, very witty woman who took what she did very seriously,” Sutton says. “There was no condescension and no gooeyness. I thought, ‘I could be someone like Zena in a perfect world.’” Sutton has worked as a young adult librarian, a children’s librarian and a branch librarian. He also wrote a column for School Library Journal about YA literature. But, he says, “I never thought I’d get to be a full-time book reviewer.”

In 1988, Sutton left the library to work for the Bulletin full time. He got the job working with Zena Sutherland on his knees. “Zena was very tiny and I’m very tall,” he explains. “I was in her office, and she was sitting at her desk, chain smoking. She told me about this job, and there was no chair. I felt uncomfortable looming over her, so I knelt down next to her desk, and that’s how I got the job.” After the University of Chicago closed its library school in 1991, Sutton and Betsy Hearne hung on as “the dangling bit” of the education and English departments. In 1993, the University of Illinois made an offer to move the Center for Children’s Books, The Bulletin and Hearne and Sutton to the University of Illinois. At first they got to keep their office in Chicago, but when they had to move to Champaign, Ill., Sutton discovered that small town life was not for him. Six months later, The Horn Book offered him the job as editor-in-chief. That was in 1996.

Sutton is the seventh editor of The Horn Book, founded in 1924. The Horn Book reviews roughly 500 books a year and “leans toward positive reviews,” according to Sutton. The more comprehensive Horn Book Guide reviews about 5,000 books annually. And in 2008, they launched “Notes from the Horn Book” in an attempt to reach parents. Through his editorials, Sutton also has a platform to discuss larger issues, such as the place of the library in a world where reading habits are changing rapidly. In the May/June issue of The Horn Book, Sutton urges libraries to use their unique position in the community to extol the virtues of the physical book. “How often do I read a virtual six pages and think, ‘I’ll check my email’ or ‘I wonder what’s on Gawker?’ That’s what the computer encourages you to do,” Sutton points out. “Whereas if you have one thing in your hand, it’s easier to concentrate on that one thing.”

He also believes that the books we read as a child make an impact in ways that other books don’t. He cites as an example the “Mad Men–esque” novel Marjorie Morningstar by Herman Wouk (who won the 1952 Pulitzer Prize for The Caine Mutiny), which he read at age 10. It follows a girl in New York City from the 1930s through the post-war 1950s as she tries to become an actress. “I really liked it and read it over and over and over again, and then I forgot about it,” Sutton says. “I recently saw it on audible.com, and downloaded it. It’s scary how much I remember — line by line. I think that has something to do with how we absorb the physical book and also the books we read when we’re young.” What you read in childhood stays with you, says Sutton.

There’s also the cachet of carrying a physical book. Part of the appeal of the Harry Potter books for kids was “hauling those suckers around” to show they can read big books. “People have always read for highbrow and lowbrow reasons at the same time,” Sutton points out. “We show people who we are by what we read. Now, the nice thing about e-readers is it allows us to hide who we are. Do you think I’d carry around Marjorie Morningstar?”

The bigger implication for libraries as electronic reading increases, is that e-books are designed for “a single pair of eyeballs,” he says. “The whole model of how these books are sold leaves libraries out in the cold. They have to insert themselves artificially. If we had a national library of e-books, you don’t need the library down the street. How will these places keep going? That’s the question.”

And where will the warring gangs find their neutral territory?