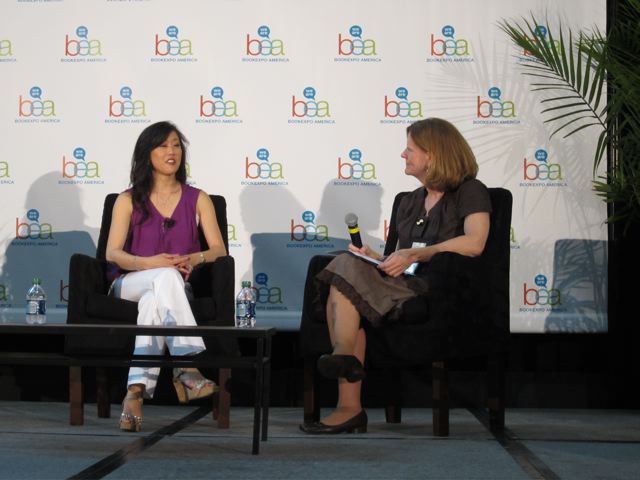 Kristi Yamaguchi’s parents gave her the chance to choose, to find her passion. She danced, played soccer, led cheers, twirled batons. None of that had staying power. But when she strapped on a pair of rental skates and felt the ice beneath her, it was, she told Jennifer Brown, the children’s editor at Shelf Awareness at a BEA event Tuesday, “love at first sight.” She wanted to take the rentals home with her. She wanted more.

More, for Yamaguchi, became ice rinks at 4 a.m. six days a week. It became local competitions and international acclaim. It became trips taken around the world, friends made in foreign places, Olympic gold. And when the competing was over and the touring began, Yamaguchi took special notice of the good that got done through the Make-A-Wish Foundation. It prompted, within her, yet another passion. She called it “Always Dream” — a foundation Yamaguchi started some fifteen years ago with the intention of honoring the hopes and dreams of children.

Today Yamaguchi’s interest and investment in children extends to her work as an author of books that feature a lovable pig named Poppy and her adventures; the second installment, It’s a Big World, Little Pig! drew long lines on Tuesday at the BEA. Poppy’s story is, Yamaguchi told Brown, in part inspired by Yamaguchi’s own experiences as a young competitor finding her way in unfamiliar parts of the world.

New places induce anxiety, Yamaguchi explained, recalling her own travels as an impressionable fourteen year old to Sarajevo in 1985. And yet, while her fellow competitors came from different cultures and spoke different languages, they were all bound, Yamaguchi realized, by a love for the sport. Smiles are universal. Passion transcends boundaries. Olympic competition is not just about competing but about representing one’s country. These are among the lessons that find their way into the adventures of Poppy, Yamaguchi’s grace-challenged but hard-working porcine star.

As a mother, Yamaguchi has, she told Brown, turned to her children for counsel throughout the writing of her books. (“Use more descriptive words,” she’s been told.) As an athlete accustomed to long hours of coaching and endless prepping on everything from interviewing strategies to hair, she welcomes the team process that she has, over time, discovered publishing to be. She has also welcomed the opportunity to closely collaborate with her illustrator, Tim Bowers, to whom she has been known to send photographs of key skating moves and suggestions for costuming.

“This has been a true labor of love,” says Yamaguchi, who admits to contemplating a third Poppy tale. “Poppy feels like a family member.”