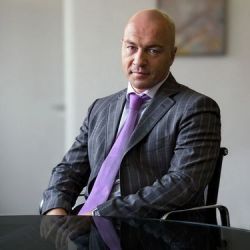 Oleg Novikov, CEO of Russian publisher Eksmo, founded the firm in 1991 while he was still a student at the Moscow Aviation Institute. By the time he graduated, Eksmo was already publishing 2-3 books a month and has since grown to become one of the biggest players in a market worth over $3 billion a year. Prior to his appearance at BookExpo America today, to participate in the panel, “An Overview of the Russian Marketplace,” we spoke to Novikov about what made his firm so successful and the state of the Russian book industry today. “The main factor that sets Eksmo apart from other publishers,” says Novikov, “Is that from the very beginning we have had an editor responsible for the fate of our books, including the financial results and managing all the processes connected with the implementation of a project. And he is expected not only to understand the literary merits of a work and the quality of the text, but to be in the full sense of the word a manager responsible for the results of his work. And so it was on the basis of the editor’s work that we established all the other processes in the publisher.”

The system worked, and Eksmo built up a diverse list which includes many of today’s superstar Russian authors, including the multi-million selling Daria Dontsova; Sergei Lukyanenko, author of Night Watch (subsequently made into the international hit movie); and Victor Pelevin and Larissa Ulitskaya, both of whom are “black swans” — critically acclaimed and bestselling authors. Eksmo is also behind the controversial series “Stalinist” and “Stalin Renaissance” which are aimed squarely at the sizeable market of readers nostalgic for the good old days of Uncle Joe. Says Novikov:

“Our publishing portfolio is sufficiently balanced. Eksmo developed by first opening up the more mass niches of literature, and after that the more specialized ones. Our expertise lies in that fact that we not only create the right product, but we deliver it to the reader, meanwhile stimulating and supplying demand.

“In recent years, our most sustained growth has been in the area of non-fiction — cook books, travel guides, popular psychology and business literature are growing at an average of 20% per year.”

Surviving in a Troubled Market

One problem all publishers, writers, agents and booksellers have to face in Russia is the steady decline in reading. Although the country is the world’s third largest producer of books, every twelve months 5-7% fewer people read books than the year before.

“Since the year 2000 there has indeed been a downward trend in reading,” says Novikov. “In our country for each reader there are 3-5 books, whereas in the USA and European countries the figure is 2-3 times bigger. Moves have been made towards improving the situation.

“For instance, we have already begun exploiting the European and American experience of promoting and popularizing reading. Those newly arrived technologies which have put books in the front line of the technological process have also made the reading more fashionable and immediate, and so have increased the availability of books.

Even so, the day when online retail replaces traditional brick-and-mortar stores remains a long way off. The Russian web remains an ocean of piracy, and legal e-books so far constitute a microscopic portion of the market. Novikov provides specifics:

“The Russian electronic book market is at an early stage in its development. Its volume is less than 1% of the total book market. And although development is quite dynamic — there has been a growth rate of 120% over the past two years — only in 2015 will market share rise to 5%. Additionally, piracy is a major limiting factor. 90% of books are downloaded from pirate sites, which seriously undermines the entire book market as a whole.”

So what is the solution? Is there a solution? Novikov makes a number of suggestions:

“From my perspective, the most effective measure is a quality alternative to piracy, providing a wide assortment of quality offerings. Over the past two years the range of legal resources has increased from 10,000 to 50,000 items. But we must strive for a figure of 150,000. I think it should be possible to achieve this within two years.

“As far as technology is concerned, all business models are represented on the Russian internet, except subscription. And creating a subscription service is one possibility. But from another side — that of improving the legislation — this process has also begun. We are planning to take steps to combat pirated material. The process is complicated by the fact that the most important pirate sites are located abroad, that they are actively using hosting services in the Netherlands and Sweden.

“We see three directions for ourselves in the struggle against pirates. The first is to improve the legislation. Those changes which should be adopted in June 2012 will introduce an analogue of the DMCA. The second is broadening the law as it applies to practice, and the third is the study of the American experience, as well as its implementation.”

Due to her vast size and frequently inhospitable terrain, Russia has suffered from distribution problems since Tsarist times. These continued throughout the Soviet period and persist to this day. When it comes to the book trade, this means that new books are not only slow to arrive in the regions, but they are often much more expensive and the selection booksellers offer to readers is severely limited. Are things getting better? No, says Novikov — in fact, they’re getting worse:

“The situation was exacerbated last year by the demise of the largest retail book chain, Top-Kniga, and there has not been a successful replacement. But the development of the Internet has resulted in a wider availability of e-ooks which has improved results in the trade publishing sector at least.

“At the same time, our publishing house has distribution centers in all regions of the country, plus Ukraine and Kazakhstan and we try to support those retailers, particularly small ones, who cannot ensure the delivery of books from Moscow to retail stores. We also help them with different marketing functions–with organizing their shelf displays, with merchandising and with advertising campaigns.”

In fact, Eksmo has its own line of bookstores, and so is deeply involved in the distribution issue:

“We have a chain of bookstores that is not included in the contour of the publishing business. The shareholders of the publisher own a share of retail network, but in addition to Eksmo there are other shareholders who exercise management and define priorities…to improve the financial performance of this retailer, and to actively interact with all the publishers on the market. Our managers working in distribution build relationships with them, just as they would with any other external customers.”

The Absence of Foreign Investment

In March 2011 Lagardere made headlines in Russia when it became the first foreign publisher to buy a major stake in a Russian publisher, Atticus. Since then Russians have been active in the book trade abroad — for instance Alexander Mamut, the very billionaire who sold Lagardere that trailblazing stake almost immediately snapped up Britain’s perennially limping chain of bookstores, Waterstones. But the Lagardere deal did not start an avalanche of foreigners looking for business opportunities in Russian publishing. Says Novikov:

“Indeed, there are very few foreign participants in the Russian market. On the one hand, this can be explained by a certain ‘closedness’ of the Russian book trade, the existence of certain specific features, for example that the top selling books are all by Russian authors.

“And then there is the general uncertainty about the future of the book market. The recession has not made the market attractive for investment. However new opportunities related to e-books could change the situation.”

Meanwhile, Novikov stresses a few important things foreigners need to understand about the Russian book market before getting involved:

“There are very few specialized publishers; even medium sized publishers are standardized. A major part of the market is taken up by the two largest publishers, who determine the situation in the Russian book market and compete fiercely with each other.

“Book pricing in the Russian market is fundamentally different from in the West. “Retailers don’t pay for the books until they have sold them, so it takes from six months to a year and a half to make a profit. Meanwhile publishers have no control over retail prices and are poorly informed as to what is happening with actual sales.

“At the very least, our publishing house is ready for negotiations with potential investors and is ready to demonstrate its potential for growth.”

Ultimately, Novikov is upbeat about the future:

“Given that every day we study the market, and see new opportunities, perspectives; and we prepare to launch new projects and are investing in increasing our working capital, we can not help but be optimistic. We could not do this if we were not optimists. The publishing business has always been quite entrepreneurial and risky, so you cannot be a pessimist in this line of work.”