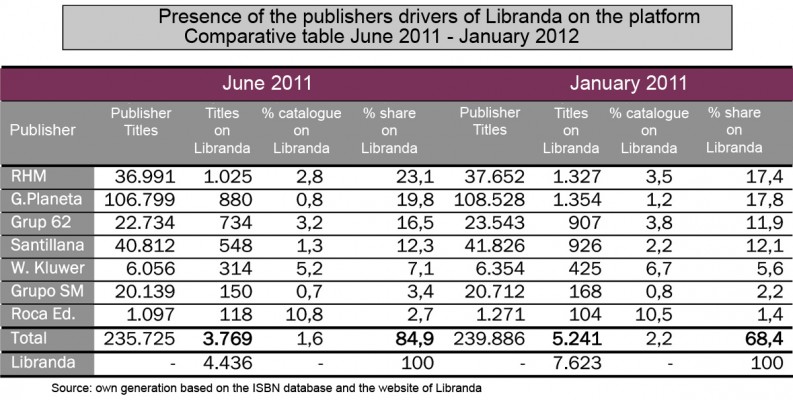 From its inception, the founders of Libranda — the Big Three, plus four other publishers — conceived of the platform as a way to spearhead the distribution of digital editions for books published in Spain. You might expect that these publishers would be the principal providers of new titles, but the data persistently says otherwise.

From its launch two years ago until today, Libranda has never lived up to its own plans and stated objectives. In fact, in terms of titles offered through the platform, they are 18 months behind their original schedule. As of June 2012, retailers and readers can find a catalog of some 8,000-odd titles, a number that should have been available by December 2010, according to Libranda’s management.

Do Libranda’s shareholders believe in their own platform? Do they believe in the digital book? According to the numbers, the answer seems be a resounding and disappointing “no” in both cases. I had to read it time and again, because I thought I didn’t understand it. But the data was crystal clear; the only puzzling part is that when comparing the data with the stated mission of Libranda — that is, to be at vanguard of digitization services and distribution in Spain — the results are obvious: Libranda’s shareholders’ inclination for digital books is, at its best, lukewarm.

As of January 2012, the seven publishers who founded Libranda had a total of 239,886 titles in print; whereas 5,241 had been digitized and transferred to Libranda for distribution to retailers, a ratio of 1 to 46.

The publishing houses who founded Libranda have digitized, on average, just a sliver of their total production. The almighty Grupo Planeta is among the most thrifty, having digitized a mere 1.2% of their print catalog; another giant, Santillana, has reached a meagre 2.2% of their total titles in print.

How can you explain why much smaller publishers have already digitized as much as 6.7% (Wolters Kluwer) and even 10.5% (Roca Editorial) of their total lists? Easy, the digitization effort is expected to be much more important for them, because the total impact on the turnover is much higher.

Are the biggest publishers simply using other platforms? Are they merely being slow? Or perhaps they’re being, in a word, blockheads?

The ratio in English is 1 to 9, while in Spanish it’s 1 to 44. Who is responsible for such a regrettable state of affairs that prevents Spanish readers from adopting e-books? The Big Three and its partners at Libranda should be leading the change and there’s no excuse for their inaction — the challenges they have to face have been faced before by their American and British counterparts.

Since June 2011, more than hundred independent publishers have been allowed to contribute their titles to Libranda’s catalog. Thanks to them the number of boos on offer has been increased by more than 2,000 titles. The numbers still dwell in the realm of the ridiculous, but they leave the giants of Spanish publishing in a very difficult position when compared to the dwarfs, who are working much more seriously towards the digital change.

Fortunately, there is life outside Libranda, otherwise it would be impossible for  Amazon, Todoebook or Grammata to offer 30,000 odd books in Spanish and a few thousand more in Catalan, Galician and Basque. This simple table, available to anyone, is a faithful mirror reflecting the reluctance of the main Spanish publishers to commit to digitization.

*Editor’s Note: Not to be overlooked, Barnes & Noble asserts it has the largest selection of Spanish language e-books anywhere in the world, offering more than 50,000 titles through their NOOK e-bookstore in the United States.