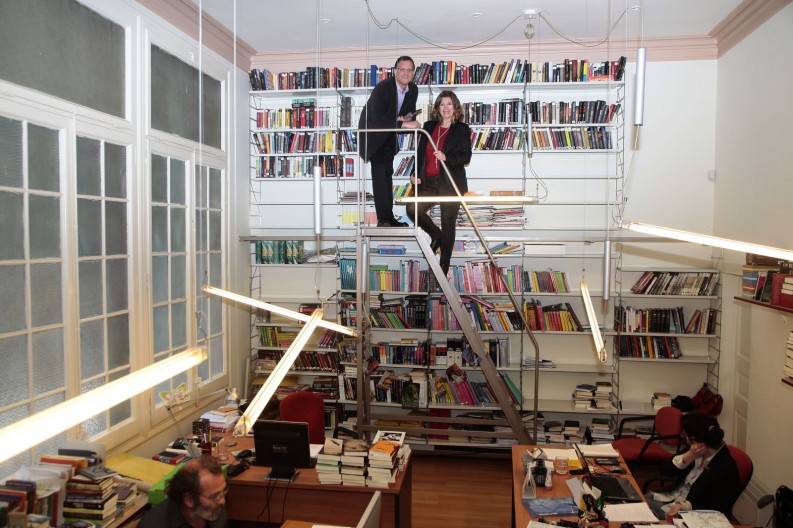 “An e-book is something you have to push all the time. Marketing and promotion never end.”

If you visit American author Noah Gordon’s page on Wikipedia, you’ll only find a disappointing stub. Almost twenty years have passed since he won the James Fenimore Cooper Prize for his historical novel Shaman (1993) and his last book, La bodega (2007), hasn’t been published in English. In Spain, though, he’s a household name and his fans are legion. The Physician (1988) is the first book in the Cole family saga, which won him international renown, and it still sells steadily in the ailing bookstores of the euro-crisis.

Gordon has been faithful to his publisher, Blanca Rosa Roca, and followed her in 2003 from the then powerful Ediciones B to her own, new independent venture, Roca Editorial. Loyalty paid off for them both. The Cole saga helped Blanca Rosa in her first steps as an independent publisher, and now the Gordon-Roca saga continues, with the launch of Barcelona eBooks, the digital spin-off of Roca Editorial. Stories are an internationally traded currency, and this one starts with La Bodega, a historical novel set in the vineyards of Catalonia and Languedoc during the Carlist Wars. The title, despite having been a best-selling success in Europe and Latin America, lacked an English publisher, even four years after its first publication by Roca Editorial. As in the Carlist Wars, frontiers are blurring and local powers are no longer necessarily sovereign over their territories. Michael Gordon, Noah’s son and an old friend of Blanca Rosa and her family, was concerned by the situation of his father’s works in English and proposed a new venture to her — if digital publishing is global, why not publish La Bodega in English? And then, all the backlist. Those books could make the journey across the Atlantic once more, but in reverse. A partnership was born.

You never invade a country without a beachhead. On April 26, Michael Gordon and Blanca Rosa Roca, shareholders in Barcelona eBooks, signed a strategic partnership with Open Road Media. The agreement is built upon Open Road’s International Publishing Program, which was previously launched with Mondadori Italy. The new publisher will issue two titles a month, most of them by Spanish authors established in Barcelona, both in their native language and in English.

In her fifties, Blanca Rosa has all the qualities of a healthy child — she’s smiling and fearless in her inexhaustible curiosity. “I’m learning every day, especially from Jane Friedman, whose digital experience is a boon for us,” she says. “E-books are another kind of beast and it’s been a challenge to explain the new cost structure to our team. No, no, I had to repeat time and again to our financial management, we can’t determine the price of an e-book in the old way, because there’s no print run and we can’t forecast how many copies we’ll be selling in the first six months. No, no se hace así,” she laughs.

“You are never done with an e-book,” she explains to me, although Blanca Rosa and I have been discussing e-books since 2001, when she still was publisher at Ediciones B. But her excitement is sincere and arises from treading new ground and challenging convention. “With print books, you publish, promote, ship and wait for the results. An e-book is something you have to push all the time. Marketing and promotion never end if you want to be serious with both authors and readers,” she says, and bursts out laughing. “Just think Jane Friedman has a team of 24, 14 of whom are marketing people. Fourteen!” Barcelona eBooks’ agreement with Open Road will allow her to benefit from a proprietary platform that focuses on connections between authors and their audiences using video content and social media.

“We’ll give our authors the opportunity to be widely read by audiences that have been out of our reach before the digital revolution and, in the meantime, we’ll learn a lot. We’ll learn new things, therefore the investment will always pay off,” she concludes, impervious to the very bad news that has soured the industry after the poor results of the Madrid Book Fair. “It’s true, things are tough in Spain. According to the Nielsen report, sales of fiction print books have plummeted. We are 27% below in the first quarter and it doesn’t seem we’ll have better news by the end of June. It’s the best moment to innovate, to try new ways. We can’t cry wolf, we have to take action.” When she says things like this, you know that you are listening to an outlier in the Spanish book industry.

Does Barcelona eBooks also plan to publish English originals? “Well, I haven’t thought about that. The project started with Noah Gordon’s books and then evolved to also bringing Spanish authors to the global markets,” she says. “It’s interesting. We are used to discovering foreign authors in order to publish them in Spain. We could start discovering them and publishing directly in English. We are too busy now, we are at the beginning and we need focus. But I’ll give it a thought.”

DISCUSS: Have a Great Story about Spanish-language Publishing? Tell Us.