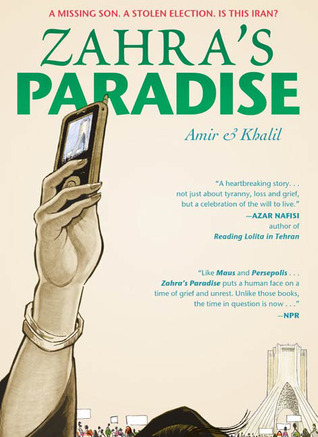 “Had it not been for all the Iranians and Google and YouTube I would not have been able to draw ‘Zahra’s Paradise,’” said Khalil.

The story at the heart of the wildly successful graphic novel, Zahra’s Paradise by Amir and Khalil, is the search for Mehdi, a young protester who goes missing during the demonstrations following the fraudulent Iranian elections of 2009 — an event which celebrated its third anniversary today. Mehdi’s mother Zahra and his brother Hassan tirelessly investigate Mehdi’s disappearance through the labyrinthine administration of the Islamic Republic, the dreaded Evin prison, and ultimately find themselves at Zahra’s Paradise, the name of Tehran’s largest cemetery, just south of the capital.

Beyond the success of the graphic novel itself, which began in serialized form in 2010, the project has been at the vanguard of a new phase in publishing and social activism. Social media networks, blogs and YouTube videos not only provided the factual material for what became a compelling story, but were also used as tools for a new form of activism.

Building a Book via Social Media

Amir, who wrote the script for Zahra’s Paradise, is an Iranian-American journalist and human rights activist. He arrived at the idea of writing a graphic novel in 2009 during the Iranian protest movements after what he said was “years of frustration with other ways of activism” that included working on a petition for President [Mohammad] Khatami that had been signed by 12 Nobel laureates. He wanted to reach the widest audience possible, and after seeing the success of the cartoon version Prince of Persia, he thought a graphic novel might work. Amir went to see Khalil, a Paris-born Algerian artist also based in the US, who had always inspired him with his art and his political cartoons.

Khalil, who was already following the political situation in Iran closely, had been living in an Iranian milieu for many years. He was intimately familiar with the politics and culture of Iran and felt a “spiritual and political connection to [Iranians]…and a natural affinity with the art.

Amir contacted Mark Siegel, the editorial director of First Second Books (where Prince of Persia was published) and a cartoonist himself. Siegel suggested the duo begin to publish on-line: “It seemed the serial webcomic was a perfect vehicle for a story on the Iranian green movement — and the stolen elections the world could glimpse through blogs, tweets and leaked YouTube videos.” Amir and Khalil, who choose to remain anonymous for political reasons, started work in February 2010, serializing Zahra’s Paradise on a blog. Using social media was essential for both authors, as neither of them could physically go to Iran—they were living the uprisings virtually.

“We knew most of the story from the start, but some of it was still in the works,” said Amir. “It was a huge leap of faith. We just trusted the journey and the story, and the characters would often guide us to places that were unexpected…One thing we did very deliberately was to write the story as if it were a blog, and one of the main characters is a blogger. Throughout the process we were very aware of the importance of social media and bloggership in Iran because of censorship.”

“In a way, it was a blog about a blog,” said Khalil. “Since the [Tunisian] Jasmine revolution, it’s been a subject but it really started in Tehran in 2009. We were just blindly, intuitively continuing that. The hero [of Zahra’s Paradise] is, of course the Iranian people, and the sub theme is the magic of these new devices of communication, we were just piggy backing on this.”

Within a matter of days following the publication of the first pages of Zahra’s Paradise, a form of global synergy began to propel Amir and Khalil forward. Reactions poured in from all over the world—and publishers took note.

“We heard from Mark [Siegel] that [the Franco-Belgian] Casterman, the comics publisher that was the most important to us—because we had grown up reading Tintin—had come on board which meant we would be published in French and Dutch,” recalled Amir.

Serializing stories is both old and new, said Siegel, whose comic Sailor Twain is currently being published online as a series.

“There have been stories in episodes since the 19th century novel (some would say since Scheherazade) but now the speed is greater, the reach is wider. It wasn’t our first experiment in this format. There’s Faith Erin Hicks, of Friends with Boys, and Derek Kirk Kim’s Tune. Each is a very unique community-building experiment, with wide ranging audiences. Where Zahra’s Paradise made history was that before we even posted the third chapter, we began selling foreign rights — not just publishing rights, but many of these editors wanted to join the online serial, too. We started out with English, Farsi and Arabic, and pretty soon we were serializing in a dozen languages. That really seems like a first for comics, for publishing, and even for dissident literature.”

Amir and Khalil were not necessarily aware that they were building a solid platform, but they felt they were on to something.

“We were too busy producing it to think too hard about it—three times a week was incredibly intense,” said Khalil. “We had a vague inkling that we were innovating and we were very empowered by the reactions that were instant. We were drawing things that had happened just a few weeks before. We were really moved and transported by the whole energy of what was happening in Iran and we became a sort of conduit for all those people trying to express themselves. We naturally and intuitively fell into that role. The reactions were sympathetic and supportive and universal. It was very gratifying; we had messages from a total of 151 countries.”

Zahra’s Paradise is open-ended, with Mehdi’s brother Hassan fleeing to Turkey. Although their lives have been overwhelmed by their graphic novel’s success, the authors are working on a sequel, which will follow Hassan’s exile in Istanbul. Turkish publisher Pegasus has also launched Zahra’s Paradise.

“Had it not been for all the Iranians and Google and YouTube I would not have been able to draw Zahra’s Paradise,” said Khalil. “This second episode will really be a change—to be able to go to a real place and draw real people.”

Besides winning a 2012 Eisner Award for best graphic novel reprint, there is also a possibility that Zahra’s Paradise will become a film, following a trend that began with Marjane Satrapi’s successful adaptation of her Persepolis series. (A film adaptation of Joe Sacco’s Footnotes in Gaza is in the planning stages.)

Amir added, “For Khalil and me the beauty of this open process was like running a marathon with everyone else. And in terms of innovation there has been another aspect that is a new form of human rights activism.”

DISCUSS: What Role Should Publishers Play in Political Activism?