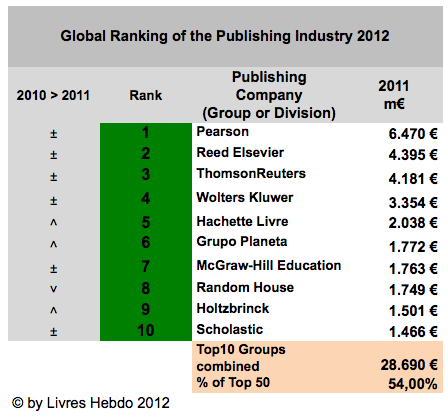 Austrian publishing consultant Dr. Rüdiger Wischenbart has released his annual listing of the world’s largest publishing companies. It lists all publishing companies worldwide with revenues from publishing (excluding newspapers, magazines, or financial services) of more than €150m or $200 million. The number hits 54, with Pearson coming in at $8.4 billion total revenue for 2011. By way of comparison, publishers — who are widely seen to be competing head to head with the major tech companies — are facing down Apple ($108 billion in 2011), Amazon ($48.1 billion), Google ($37.9 bn), and Microsoft whose $69.9 bn for the year is just a touch more than the total revenue for all the publishers on Wischenbart’s list, which comes in at $68 bn.

You can read the full listing of the world’s biggest publishing houses in terms of revenue (in dollars) at Publishers Weekly.