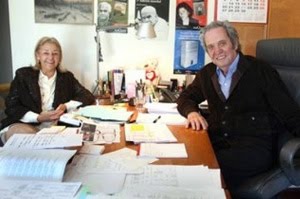 Spain may have the Big Three, but it’s also the proud headquarters of two medium-sized publishing houses that are as central to the Spanish publishing landscape as Planeta, Santillana or Random House Mondadori. For the past four decades Anagrama and Tusquets have been the darlings of readers and literary critics, both for their high quality books and their independence. Long run by their owners as family businesses, neither Jorge Herralde of Anagrama nor Beatriz de Moura of Tusquets had an heir that could continue their work after them. In December 2010 Herralde sold Anagrama to Feltrinelli, the Italian publisher founded by the late Giangiacomo Feltrinelli in 1954 and currently run by his son, Carlo. By going with Feltrinelli, Anagrama — the “yellow plague” as José Manuel Lara, the mythical patriarch of Planeta, used to call it because of the color of their covers — avoided being consumed by multimedia conglomerates like Hachette or Bompiani. But Beatriz de Moura, whose Brazilian beauty has been celebrated by the intellectual left since the ’60s, encountered another fate. Though rumor had it that the French Gallimard was interested in buying Tusquets, on April 27 the announcement that the Planeta Corporation had bought at least 50% of the company hit the media. De Moura was in charge of breaking the news.

The parties haven’t revealed the details of the deal, although it is public knowledge that de Moura and Pantaleón Bruguera, CEO of Tusquets, will be part of the Board of Directors. This isn’t the first time that Tusquets and Planeta have partnered — in 1995, Planeta acquired 40% of the company, although in 1998 de Moura and Antonio López de Lamadrid bought back the shares.

In 2009, after the untimely death of her husband and business partner, Antonio López, de Moura had declared that Tusquets was not for sale. Now, she states that the deal has taken a load off her shoulders. Times are changing, digital publishing is knocking at the door and the euro crisis is punishing the industry with its shrinking consumer markets. De Moura estimates that fiction sales have plummeted 30 percent compared with the same period in 2011. “I want Tusquets to survive these dire times. I’ve struggled 43 years and a medium-sized publisher can’t face challenges alone nowadays. And I also have to think of the lives and wages of our 24 employees. I’m happy. And I’m still independent,” she says.