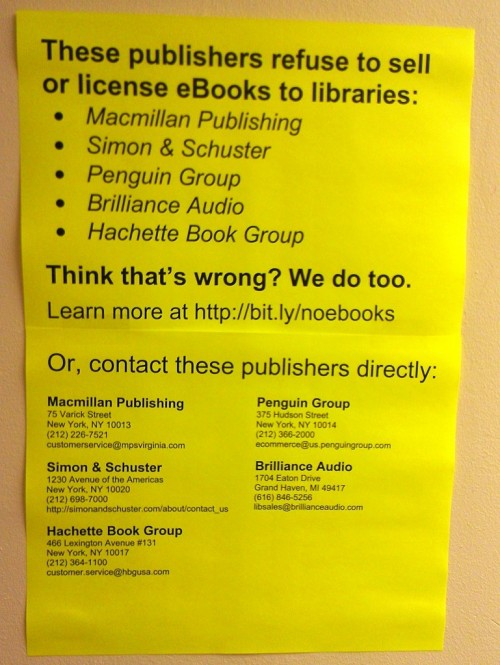 Libraries are by-and-large a public service. And they are a complicated public interest issue. But a few things are clear:

My own hometown library system in Houston offers e-books, but good luck getting one. A recent search for popular titles such as Game of Thrones or Erik Larsson’s In the Garden of Beasts revealed that the library — one that caters to the fourth largest city in the United States — holds just a single digital copy of each. The waiting lists for these and several other titles ranged from 25 to 99 people (one assumes that is the maximum allowed). Naturally, I clicked over to a e-bookseller and within 60 seconds had what I wanted — for a price.

Having captured my interest, wouldn’t it have made sense for the library to have tried to sell me a copy of the book? They already have a record of my name, address, card number and other pertinent information. They have the database of books. How hard could it be? At a time when enabling consumers to act on impulse is a key to winning sales, it seems like a lost sales opportunity — one libraries would do well to capitalize on, especially considering the economy.

What’s more, with publishers implementing such a diverse array of e-book lending policies, it makes even more sense, especially considering how many titles might never end up available to library patrons.